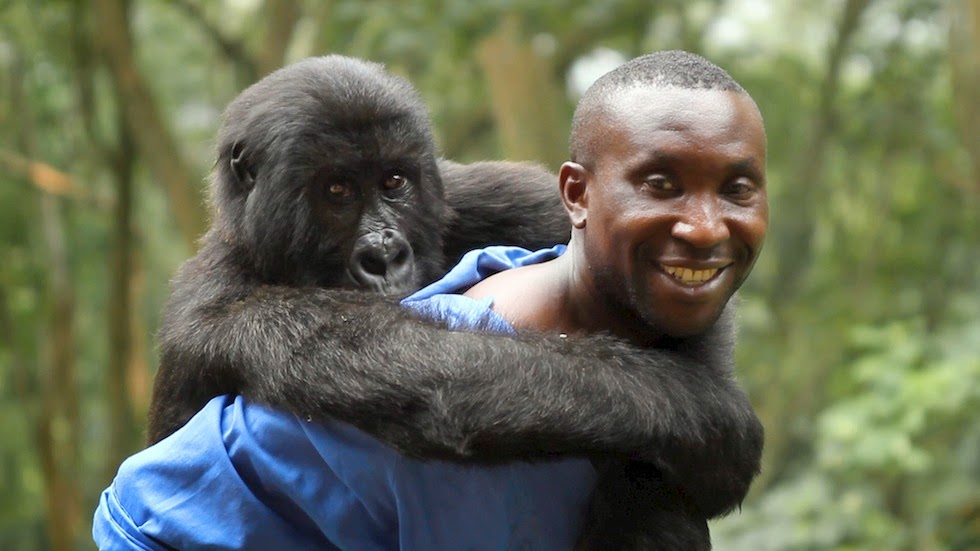 This is another documentary that is owned by Netflix. It had a very limited theatrical run, probably one that was only basic to qualify for an Academy Award, but it's now exclusively available to stream on Netflix Watch Instant. It's already a nominee for the Independent Spirit Awards for Best Documentary. It starts off with a brief history of the Democratic Republic of the Congo, the country in central Africa. In 2010, oil was discovered in Virunga National Park, which is off Lake Edward. A British oil company called SOCO International wants to explore and dig up that oil and most likely make a fortune. This movie by Orlando von Einsiedel deals with that company's possible or alleged involvement in the conflicts that threaten death and destruction to the National Park.

At the center of all this is a preserve or sanctuary that houses and cares for gorillas. Virunga National Park has a kind of orphanage, an orphanage that protects the only mountain gorillas in captivity. Armed rangers are employed to patrol Virunga. The documentary opens hauntingly with the funeral of one of those rangers. It's revealed that actually 130 rangers have died protecting Virunga, underscoring the danger here.

The danger has come in part from poachers who will take baby gorillas after killing their parents to sell the baby gorillas for various reasons. What follows early in the movie is reminiscent of the recent short documentary that played in IMAX theaters called Born to be Wild (2011). We get to see the men of Virunga taking care of the gorillas, as we become familiar with both man and ape, and how the men have come to love the animals and why all would die for them.

The movie then switches gears and becomes about the possible or alleged conspiracy between SOCO International and the subsequent invasion of M23 rebels that felt like a mini-war that broke out. A key player is Mélanie Gouby, a freelance journalist who worked in the area to expose the conspiracy or at least SOCO International's connection and level of involvement in the threat to the park.

The filmmakers capture some great moments. Some are undercover and in secret. Some are funny like a gorilla picking its nose and then eating it. Other moments are harrowing like when the main building in the National Park called Rumangabo came under fire by M23 rebels. It makes overall for an interesting testament in the ongoing struggle of fossil fuels versus environmentalism, as well as the ongoing narrative of corrupt corporations and immoral commercialism.

Four Stars out of Five.
Not Rated but for mature audiences.
Running Time: 1 hr. and 40 mins.