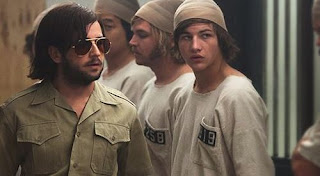 Before this film, I saw a trailer for an upcoming movie called Experimenter, which is about the Millgram experiment in the 1960's. It's a perfect companion for what's depicted here. Both are psychological tests to see how human beings will react or how they'll behave under certain conditions. The Millgram experiment doesn't seem to exert any physical harm against another actual person. It's perceived harm, but not actual harm. The experiment depicted here at Stanford University has students pretend to be either prison guards or prison inmates where they would have to stay in locked rooms in the basement of one of the school's buildings. One rule was no hitting. Yet, by day one of the two-week experiment, that rule was broken, so unlike Millgram, this experiment resulted in actual physical harm.

Billy Crudup (Almost Famous and Watchmen) stars as Phil Zimbardo, a psychologist and professor at Stanford who is the one conducting this experiment. Even when rules are broken, he doesn't intervene. He becomes obsessed with letting the experiment go with no checking of the guards. As is pointed out by a colleague in passing, Zimbardo might not have set-up the experiment properly. He can't answer what his variable or control is.

Unfortunately, it becomes difficult to understand what Zimbardo's motivation actually is. He might simply be incompetent and is doing this not because it's an interesting experiment but simply as something bold to add to his résumé or credentials. It might be a test of identity and in general a test of the effects of prison on people. He might simply be entertained once the experiment became a demonstration of sadism. One person suggests that this is punishment against boys who are white and privileged.

The problem is that we never learn what Zimbardo is truly after. He mainly functions as the guy insisting that the experiment continue despite the rule-breaking and no clear direction until he isn't and he just stops the experiment six days after it started. He ended it on August 20, 1971.

James Wolk (Political Animals and Mad Men) co-stars as Mike Penny, a researcher helping Zimbardo conduct the experiment. He gives a good performance, as a conflicted guy who is excited by the experiment but is worried when things immediately go off the rails. He is a very good actor and a very handsome actor. Unfortunately, the 1970's hair and makeup, not only on him but several others, were more distracting whether authentic or not.

Nelsan Ellis (True Blood and Get On Up) also co-stars as Jesse Fletcher, another adult who helps Zimbardo conduct the experiment. Ellis also gives a good performance of a guy who actually was in a real prison and is here offering a real-life experience or a real-life basis of comparison. Yet, his personal feelings of resentment and revenge start to affect him and bleed into the experiment to the detriment of both.

Michael Angarano (Sky High and The Forbidden Kingdom) co-stars as Christopher Archer, a student who is assigned to be a prison guard. He becomes one of the first to start pushing boundaries and transforming into a veritable sadist. He wants to torture and do whatever he can to make the students assigned as inmates have a hard time, as hard a time as possible. Given his stature, he perhaps has a Napoleon complex. Nicholas Braun who is very tall in stature plays Karl Vandy who follows suit with Christopher. Interesting note, Angarano and Braun co-starred together in Kevin Smith's Red State.

Ezra Miller (We Need to Talk About Kevin and The Perks of Being a Wallflower) co-stars as Daniel Culp, a student who is assigned to be a prison inmate. He is particularly assigned as # 8612. He's one of the first to start pushing back against the guards who are becoming drunk with power. He resists and starts to protest in whatever way he can. When his attempts fail, he quickly starts to unravel.

Tye Sheridan (The Tree of Life and Mud) who plays Peter Mitchell or # 819, Johnny Simmons (Evan Almighty and The Perks of Being a Wallflower) who plays Jeff Jansen or # 1037, Thomas Mann (Project X and Me and Earl and the Dying Girl) who plays # 416 and Chris Sheffield (Aquarius and The Last Ship) who plays Tom Thompson or # 2093, all give fantastic performances.

In fact, there is a great scene between Angarano and Sheffield in which writer-director Kyle Patrick Alvarez keeps the camera close and right in their faces. It's a true test of wills between the two boys, and how far one will go and how much the other will take, and especially how strong 2093 is and if 2093 will break. A line in the sand is drawn over the issue of profanity. Alvarez doesn't have many edits here. It feels like an endurance test and it comes across as immersing and very discomforting. It's a great scene. Another interesting note though, Sheffield appears in the film The Maze Runner, which stars Ki Hong Lee who appears in this film as well.

There are obvious and even textual references to prison films like Cool Hand Luke (1967). Moments like the test of wills between Christopher and 2093 are more reminiscent of films that are about men in the military and going through boot camp, a very severe boot camp. Yet, even if one compares this only to other prison films, it can't measure up.

The problem is that there are no stakes. If this weren't essentially a docudrama, a virtual re-creation of a real-life incident, I wouldn't have believed or bought anything that happened here, but accepting it as true, it ultimately amounts to not much. I have enjoyed all of Alvarez's two previous films, so I trust his judgment, but honestly, I don't get the point of this feature. In fact, a straight documentary might have been more compelling because I'm not sure if an extrapolation can be drawn from what is seen given the specific parameters. For example, there is no artifice like with Millgram that would be convincing to make the inmates believe they were actually in prison. When they do start to believe that, it's a leap that the audience can't make.

Given the events in Abu Ghraib, some might argue that the things in this movie can be extrapolated, but there's an aspect with Abu Ghraib and other real-life prisons about the inmates being men of color. Inmates who are black or brown are treated differently and arguably worse in the criminal justice system in terms of arrests and convictions, meaning mistreatment would follow in jails and prisons. This aspect is hinted through some of the characters but isn't practically applied. The racial component that's key to the current criticisms of prisons is absent here.

Three Stars out of Five.
Rated R for language including abusive behavior and some sexual references.
Running Time: 2 hrs. and 2 mins.