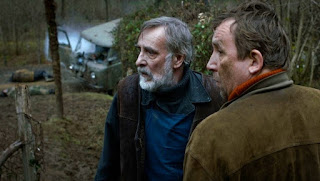 This is the fifth film that was nominated this past year for the Academy Award for Best Foreign Language Film. It's the fifth in terms of when the film was released theatrically in the United States. The Best Foreign Language Film winner was Ida from Poland, which came out in the U.S. first. It was followed by Leviathan from Russia, Timbuktu from Mauritania and Wild Tales from Argentina. This one is the last to hit American theaters, but it's certainly not the least. It's a war film that doesn't depict war, but instead the fringes of it.

Written and directed by Zaza Urushadze, it comes from Estonia. It's the 12th time that Estonia has submitted a film to the Academy, and it's that country's first nomination. Estonia is a country in northern Europe along the Russian border. However, the film takes place in the 1990's during the bloody conflict between the nation of Georgia and Abkhazia when ethnic Estonians were forced to return to their homeland.

Lembit Ulfsak stars as Ivo, an ethnic Estonian whose family has returned to their homeland. Ivo is an older man, a grandfather in fact. He's old with gray hair, but he's tall and strong, still somewhat fit. He's the only member of his family who has stayed in the war zone. He's stayed because he wants to help his neighbor with his tree farm.

Elmo Nüganen plays Margus, the neighbor with the tree farm, and all the trees are filled with beautiful tangerines. He's terrified, but he doesn't want to abandon his farm, which has tons of crops. The only way he can ship them out is through wooden crates.

Ivo's function is to make the crates. Ivo has a tiny shop next to his house where he can cut the wood and fasten the pieces together. He then gives the crates to Margus. Margus insists they hurry as the war zone continues to expand and will eventually reach the tree farm.

Giorgi Nakashidze co-stars as Ahmed, a Chechen mercenary, and Misha Meskhi also co-stars as Niko, a Georgian actor recruited into the war. An explosive incident strands both Ahmed and Niko at Ivo's house where Ivo has to nurse and feed them. The problem is that Ahmed and Niko are on opposing sides and want to kill each other.

Ivo is the peacekeeper and a kind of diplomat. His wisdom in that regard comes form his age and perhaps having more control of his emotions. Ahmed and especially Niko are younger and can mostly see what's right in front of them and the emotions on the surface. They don't see what's beyond or what's underneath. Ivo exists to help them to do so, or help them to recognize their similarities rather than differences.

The performances from each of the four actors are superb Urushadze's writing and directing are gritty realistic. The cold and war-torn landscape are perfectly captured. The hostility and fear in air as well as the warmth and compassion are caught in Urushadze's frame-after-frame. It's a great expression.

Five Stars out of Five.
Not Rated but for mature audiences.
Running Time: 1 hr. and 26 mins.