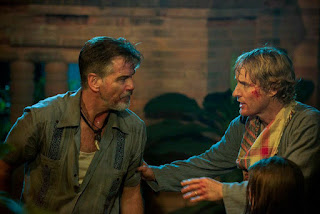 There is extreme, political turmoil going on in this southeastern Asian country, which isn't identified, except that it borders Vietnam, so the country is either Cambodia or Thailand. There are no subtitles, so we never know what these brown-skinned people are saying. We don't get any of the issues from the point-of-view of the Asian natives. There are some scenes where the issues can be extrapolated and there are some scenes of English dialogue where problems are explained. Because of which, it could be seen as just another example of stereotyping brown-skinned people as evil savages, and white-skinned people as the saints, but it didn't come across that way to me.

Owen Wilson (Midnight in Paris and Wedding Crashers) stars as Jack Dwyer, an engineer working for a corporation named Cardiff. He has a wife and two daughters. They all relocate to the aforementioned, Asian country from Austin, Texas, for Jack's job, which he thinks is to help improve the water system in that city or area. Unbeknownst to him, his arrival coincides with all the political turmoil, including a large, violent, street riot and the unleashing of a brutal and vicious militia that targets all foreigners and foreign sympathizers.

Directed and co-written by John Erick Dowdle, the film feels like the recent World War Z, minus the zombies. It's essentially about a family trying to escape aggressors that have over-run the city. That comparison could be in itself offensive because it's not really minus the zombies. The zombies are transposed as the nation-vague Asian antagonists depicted. Maybe a better comparison would be the recent Purge: Anarchy, except this film doesn't just have random acts of violence for violence's sake.

I would argue that this film is better than World War Z and Purge: Anarchy because even though it is vague and non-specific, it's highly effective much in the same way as Gravity or The Grey. No, it doesn't take place in outer space or the Alaskan wilderness, but Alfonso Cuarón and Joe Carnahan crafted the action to escalate as the protagonists moved from scene to scene toward its goal-location.

As a pure, action flick or thriller, it thoroughly succeeds. It's always tense or exciting. It's at times scary and shocking, thanks to great use of sound editing. It also has great escalation. Despite all the death and destruction, it also is able to be funny, if only in small doses to ease the constant uneasiness. The movie, thanks mainly to the performances, always has you on seat's edge, worried that these people could really die in horrible fashion.

Lake Bell (In a World and Million Dollar Arm) co-stars as Annie, the wife of Jack. She's also the mother of his two daughters, Lucy, played by Sterling Jerins, and Beeze, played by Claire Geare. From scene-to-scene, they really maintain this sense of terror and dred.

Pierce Brosnan (GoldenEye and Mrs. Doubtfire) also co-stars as Hammond, a mysterious but seemingly fun-loving and charming man who is there in southeast Asia on business too. When all Hell breaks loose, he steps up and becomes the Liam Neeson of this film. He even has a great moment proving he won't die lying down. Yet, it's through him that we surprisingly get the heartless reality but at least the recognition is made that there is no difference between us and them. It's an attempt to counter-act the demonization that can easily come with such a depiction here of these brown-skinned and angry people.

What undermines that is the ending. The political turmoil that kicks things off is simply abandoned. We don't even get a title card on the tail that explains what happened to the government or the people of that Asian country. A U.S. Embassy is attacked and Cardiff company members are killed and there's no follow-up.

Four Stars out of Five.
Rated R for strong violence including a sexual assault, and for language.
Running Time: 1 hr. and 41 mins.