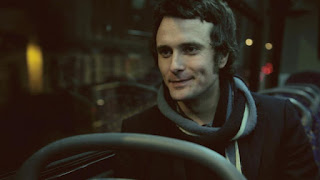 Writer-director Tom Shkolnik's British feature came out in the United Kingdom in October 2012. If it came to theaters in the United States, it probably was very limited and totally passed me by. It seemed recently to be added to Netflix, and it appears to be a cheap and easy buy for the video-on-demand service, especially a cheap and easy title for its LGBT section, which doesn't get a lot of new additions.

Edward Hogg stars as Ed, a twenty-something, stand-up comic who goes to comedy clubs at night to perform his act. His on-stage persona is quite a character. He's loud and brash. His entire act is screamed. He literally yells every line and every punchline. He doesn't get a lot of laughs from his crowds, despite having some good jokes like a bit about fruit racism. Yet, this is contrasted with how he is during his personal life or his time off-stage. In his personal life, he's quiet and quite passive.

Elisa Lasowski co-stars as Elisa, the roommate of Ed. She's a musician. She plays the guitar. She's also a singer-songwriter. She really gets along with Ed. We see them playing basketball together and having a laugh. She perhaps gets along with Ed a little too much. She has maybe developed feelings for him. There's only one problem if that's the case.

Nathan Stewart-Jarrett also co-stars as Nathan, a young, black, British boy who attends one of Ed's comedy nights and then approaches him on the bus afterwards. He charms Ed and the two go back to Nathan's place and have sex. The two then launch into a relationship.

This creates a quasi-love triangle between Ed, Elisa and Nathan, but it's the lamest, love triangle to come along in a while. Because of the scene on the bus, it's understood the relationship between Ed and Nathan, but after Elisa sees them be gay for each other, her inner life and social life become a mystery. What leads her to kissing Ed, for example, is unknown. I don't get why she's interested him romantically, or what her romantic life is at all.

Shkolnik's feature paints an unlikeable character in Ed and doesn't do much to change that. He's just allowed to sit there. Even when Nathan challenges Ed, he still just sits there. By the end, there's no arc for him. He starts out in one place and doesn't advance. Therefore, what was Shkolnik's point?

He injects a tense scene, again on a bus, of extreme homophobia. It's a jolt from the dreary nothingness of the love triangle. It perhaps aides in pushing Ed into Elisa's arms, but again it doesn't explain Elisa's actions. The ending, which is an extended taxi ride, is flat and resolves not much. In addition, the cinematography is a bit muddy. There isn't much lighting. Shots are all appeared to be done from a distance. It's almost shot documentary style but even rougher and more detached.