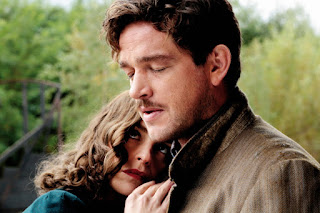 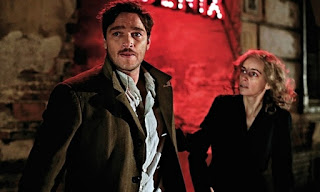 People compare this picture to an Alfred Hitchcock film. The plot is somewhat similar to or have echoes of such titles as Rebecca (1940), Vertigo (1958) or Marnie (1964). Co-writers Christian Petzold and Harun Farocki adapt the 1961 novel Le Retour des cendres by Hubert Monteilhat, which invokes the same intrigue and even passion as those Hitchcock movies, but director Christian Petzold doesn't invoke much more. Yet, he captures two of the greatest performances of the year with amazing chemistry between two, human beings that is undeniable.

Nina Hoss stars as Nelly Lenz, a Holocaust survivor who nearly died but who had plastic surgery, which totally changed her appearance. Ronald Zehrfeld co-stars as Johnny Lenz, her husband who is suspected of betraying her to the Nazis.

When Nelly returns to their home in Berlin, which has been destroyed, she runs into Johnny and he doesn't recognize her, but he does come up with a plan. Nelly never contacted her family, so they don't know if she's dead or not. She lies to Johnny and tells him that she's a woman named Esther. Now, he wants to lie and convince Nelly's family that Esther is Nelly.

It's a soap opera-kind of setup where Johnny is trying to transform a woman into his wife when in reality that woman actually is his wife. The interplay though is great. The two are great to watch on screen, but there's not much that happens. There's not much of a plot. It's an emotional build-up mostly.

There's several layers of acting occurring. Both actors, besides being very talented and nuanced, are both highly attractive. Watching the two on screen is a total treat. Zehrfeld has the presence of Marlon Brando or Cary Grant and Hoss has the presence of Ingrid Bergman or any other Hitchcock blonde.

This film, however, ends on a very powerful note. It reveals so much and represents the amazing nature of great cinema. It's as much of a knockout as the ending to Michael Clayton (2007). For a subtle drama, this film concludes with a musical number. "Speak Low" is somber and heartbreaking as performed by Hoss and Zehrfeld.

Five Stars out of Five.
Rated PG-13 for some thematic elements and brief suggestive material.
Running Time: 1 hr. and 38 mins.