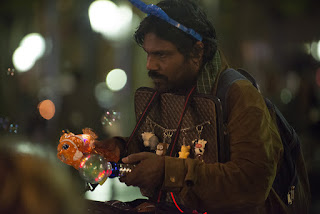 This movie won the Palme d'Or at the 2015 Cannes Film Festival. It was nominated for nine César Awards, including Best Original Screenplay, Best Actor, Best Director and Best Film. Co-written and directed by Jacques Audiard, it feels like he's taken elements from his two previous features and wielded them here in great order. His two previous were A Prophet (2009) and Rust and Bone (2012). With any filmmaker of good, crime drama, he wields muscularity of violence and familial tenderness finely, blending them in seamless and sometimes in shocking but satisfying ways. This movie also does what the recent No Escape (2015) failed to do. It's a great immigrant story without being preachy, or overly appealing to liberals.

Jesuthasan Antonythasan stars as Dheepan, which isn't his real name. He takes the name of a dead man because he needs a new identity to get out of his war-torn country of Sri Lanka. He might have even taken apart of the war. He doesn't seem like a soldier though. When he emigrates to France, he first hustles on the streets selling shining toys but then he works as a caretaker or glorified handyman at a rundown apartment-building somewhere in or near Paris. He looks like an unassuming handyman, quiet and non-threatening.

Kalieaswari Srinivasan co-stars as Yalini. She not only looks like but she actually is a small, quiet and unassuming woman. She accompanies Dheepan to France from Sri Lanka. She doesn't know Dheepan. She didn't know him. She simply saw he was leaving and attached herself to him. She didn't have a husband or anything and seemingly couples have a better shot of emigrating than singles. What also has a better shot is parents. Yet, Yalini isn't a parent.

Claudine Vinasithamby also co-stars as Illayaal, the 9-year-old girl who doesn't have her parents. Her aunt was caring for her, but Yalini offers to take her instead. Yalini doesn't have any concern for Illayaal. Yalini simply wants to use the little girl as a prop because the immigration officials let parents pass more than singles. Illayaal is probably more like Dheepan. She's quiet and unassuming but also has a bit of fight inside her.

Dheepan, Yalini and Illayaal become a makeshift family but not really. At first, each keeps to him or herself and do their own things nary crossing paths. Dheepan does his handyman thing. Yalini becomes a maid for the elderly and infirm father of a local drug dealer named Brahim, played by Vincent Rottiers, and Illayaal goes to school, learns the language and is encouraged to fit in as Dheepan encourages them all to fit in.

That's why it's a great immigrant story. It depicts immigrants in a frank and honest way. All they're trying to do is work and learn so they can fit in, support themselves and contribute. There's a bit of a language barrier. Dheepan mainly speaks Tamil. There are cultural clashes. Along the way, there are internal clashes, as the three start to bond and go from being a makeshift family to a real one, even loving each other.

Things take a turn when the drug gangs, one of which is led by Brahim, begin to escalate their tensions. Dheepan gets caught in the middle and tries to stop it. Audiard, as director, has always included moments of violence in his films, particularly his two most recent. Those moments have always been isolated and pointed. Here, Audiard crafts a full-blown, action sequence where the last 15 to 20 minutes is dedicated to this, non-stop, kick-ass firefight.

It's a scene that doesn't have the spectacle of something like the airport face-off in Captain America: Civil War or all the sequences in Mission: Impossible - Rogue Nation. It did remind me of the grit and grace, as well as the scruffiness that Paul Greengrass or Alfonso Cuarón might employ. In fact, the scene is almost a blend of Greengrass and Cuarón, and the fact that it keeps going in almost one, long, continuous take ratchets the tension. The energy is heart-pounding but Antonythasan's performance is exasperating, but one admires his determination, his adrenaline and his indomitability.