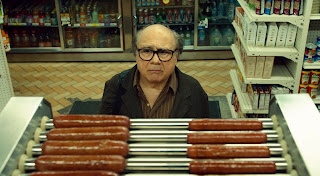 The title is a reference to writer-director Todd Solondz's second film, which still stands as his best. This is his eighth feature, and it feels that after 20 years or so, his razor sharpness has dulled a bit. With his sophomoric hit film, Welcome to the Dollhouse (1996), he ripped into suburban culture, childhood, education, friendship and family structure with such savageness. Even watching it 20 years later, it's still hilarious. Here, Solondz is less savage as he is cute and sentimental. Whereas a lot of comedic films come from characters experiencing pain, physical pain as is the case with slapstick, Solondz's characters experienced mostly emotional pain or extreme embarrassment. The potential for that deep emotional pain is present in this film, but when you think Solondz is really going to go for it, he pulls back.

This feature is actually four, short films, which have been strung back-to-back. I outright didn't like one of the short films. The others are fine, but the comedy isn't as piercing as one is accustomed with Solondz's previous works. The characters and situations are intriguing, but they are too short. He could have made three, feature-length films out of them where he could have further developed things and sharpen the humor.

The opening short is fairly good. It features a nod to Boyhood (2014) with a shot of a young male lying in the grass. Yet, this short asks more provocative questions in its 15 to 20 minutes than in all of that 3-hour, Richard Linklater film. Aside from the toilet humor, it does have a great joke in the middle of it that's a classic, Todd Solondz sting. Julie Delpy basically tells a bedtime story of something horrible happening to a dog and it's quite funny. Unfortunately, none of the other shorts achieve or deliver something that's up to that level comedy-wise.

The second short is the quasi-sequel to Welcome to the Dollhouse. Greta Gerwig (Maggie's Plan) stars as Dawn Wiener and Kieran Culkin (Fargo) co-stars as Brandon McCarthy. Both actors do good approximations of the original characters from the 1996 film, but there is no story here. Arguably, the 1996 film didn't have a story either. It instead worked as a coming-of-age flick, but still had more of a plot than this. This short is nothing more than a memento, a reminder of his best work if not only to add credibility to this.

The third short is probably the sharpest and the most in-line with the powerful punches Solondz used to throw. Danny DeVito (Taxi and It's Always Sunny in Philadelphia) stars as Dave Schmerz, a professor who teaches filmmaking and who is also a screenwriter trying to sell a screenplay. His interactions with his students, his agents and the school administration bring out so much about what is wrong with Hollywood culture and youth culture in general. It's reminiscent of a short film within the Oscar-nominated Wild Tales.

The fourth and final short centers on Nana, played by Ellen Burstyn, an older woman who gets a visit from her granddaughter Zoe, played by Zosia Mamet (Girls), and her aloof but artistic boyfriend, Fantasy, played by Michael James Shaw (Limitless). One can immediately tell that Nana is a bit of a curmudgeon. It's obvious she doesn't get much visits from people, which probably contributes to her curmudgeon nature to both her dismay and delight. When Zoe asks for money for Fantasy's art show, it doesn't seem like it will go well.

There definitely seems to be a purpose to the progression of these, four shorts. The protagonists in each get increasingly older. The first is Remi, a prepubescent boy. The second is Dawn, a woman in her 30's. The third is Dave, a man in his 50's and possibly 60's. The last is Nana, a woman in her 70's and possibly 80's. Each protagonist says something about mortality, which is a definite theme.

Remi asks if, "Death is a good thing?" Dawn is told at one point, "Your death is a part of life." Dawn refuses to bring death upon a dog as a veterinarian or worker at a kennel. Dave, on the other hand, comes to a point where he does want to bring death upon others. Nana perhaps waits for death to be brought upon herself. She's told too, similarly to Dawn, "everything has an end." It's an obvious theme, but not incredibly compelling.

Three Stars out of Five.
Rated R for language and some disturbing content.
Running Time: 1 hr. and 30 mins.