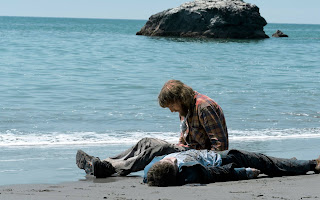 I've found that fart jokes often aren't that funny. It's only on few occasions where a fart joke can generate a genuine laugh. Within the past decade, I can only think of two films that have had a good, fart joke. The first is Obvious Child (2014) and the other is The Skeleton Twins (2014). Thankfully, those films only utilized one fart joke. Really more than one is generally too much. However, don't tell that to the makers of this film. Writer-directors Dan Kwan and Daniel Scheinert bank on the fact that perpetual fart jokes could be comedy gold. Yet, that's just one of a series of physical gags that this movie employs.

The title is a play on the multi-purpose tool that people who use in order to help them survive. That tool is the Swiss Army Knife. The Swiss Army Knife is actually a compact, combination of several tools. It's not just a knife. It's several other things like scissors, a saw, a screwdriver and pliers, etc. Here, the conceit basically says that instead of a small object made of metal, that so-called Swiss Army Knife is going to be the entire body of a person.

Paul Dano (Little Miss Sunshine and Love & Mercy) stars as Hank, a young man who finds himself stranded on a deserted island. There is no explanation of how he got there or even where he came from, but, at the start, he's at the point where loneliness and desperation have gotten the better of him, and he's attempting to commit suicide. A strange occurrence stops him.

Daniel Radcliffe (Harry Potter and the Sorcerer's Stone) co-stars as Manny, a well-dressed man who has recently died and whose dead body washes up on the shore of the same deserted island. There's no explanation of how he died, but his body doesn't appear to have been traumatized. He probably drowned accidentally, but that doesn't matter. His origins aren't and never are the focus. It's only important that Manny is the titular character and his lifeless body has super powers that are just as, if not more handy than a Swiss Army Knife.

However, it would be quite limiting and possibly boring if Manny's body were totally lifeless. Manny is like a zombie, though one that doesn't decay, more like one ready for a stint on iZombie but not hungering for grey matter or flesh of any kind. He's basically a friendly zombie but he's the least animated corpse that has probably ever been put to screen, yet he's also by far the most emotional other than one in iZombie.

The movie is a two-hander where the majority is just Hank and Manny on screen and no one else. It's an absolute bromance, probably the best bromance since I Love You, Man (2009). This movie, however, goes much further and veers more into queer intrigue like incorporating a drag queen scene. As the film does dangle a heterosexual romance in front of the characters, it's revealed by the end only to be bait. I Love You, Man does end with a very straight wedding. The last sentiment is between the two men but it's still under the context of a traditional marriage that's happening. Here, the ending eschews those hetero-normative aspects and makes the love truly between the two men.

Some people might not be able to tolerate all the fart jokes. They're numerous, but they're not as excessive as one might think. There are other physical gags that are related to toilet humor, but the movie is not solely reliant on that. The real humor comes from the conversations between Hank and Manny. Hank is revealed in flashbacks to be a very shy and a very reserved guy. It's unsure what kind of man Manny used to be but as an animated corpse, he's very inquisitive, almost like an amnesiac or an alien recently dropped on Earth. As such, Manny forces Hank to come out his shell and not be so shy or reserved.

Manny asks questions about life and death and love, which forces Hank to answer them and talk about life and death and love. With Manny's child-like intelligence and basic comprehension skills, it's funny to hear Hank's explanation of things like how various bodily functions work or what cheese puffs and Sports Illustrated are. As complicated as the world can get, the simplicity of Hank's language to Manny allows the characters and the audience to get at the core of what's important, the fundamentals.