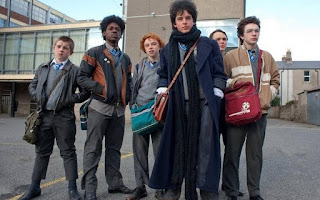 Irish filmmaker John Carney loves to make movies about musicians, or else he just likes to see them do their thing. His Oscar-winning film Once was almost done documentary-style where he captured simple, bare-bone performances on the street. His Oscar-nominated film Begin Again had slightly more money behind it and celebrity actors. It was a bit more straight-forward with some flourishes here and there. This film is a step back, a step away from the Hollywood direction he was going in Begin Again. Yet, this movie gets to a point where it feels like a series of music videos aping other styles, loosely strung together with the thinnest of narrative threads.

The movie also has a similar feel to recent, Sundance Film Festival selections, namely Me and Earl and the Dying Girl (2015). A young, skinny, artistic, white kid falls for a pretty girl and performs his art to impress her or to be romantic. It's undeniably a cute scenario, sweet and heartfelt, and it's hard to begrudge Ferdia Walsh-Peelo who plays Conor and Lucy Boynton who plays Raphina, as their little, teenage love story is nice and touching, but, as it's happening on screen and even the instant it's over, the whole thing quickly fades with a big "who cares."

Maybe Carney made this film as a type of heterosexual, white-male fantasy that even if you're awkward or artistic, you can get the girl that looks like a model. Thankfully, Carney did a good job of making her more than just the pretty girl and he also does a better job than Alfonso Gomez-Rejon by not making Raphina just the angelic, dying girl. She might be approaching what's been dubbed "the manic pixie dream girl" but not quite.

She's in many ways a muse for Conor who is a singer-songwriter. It does seem odd for a guy who doesn't play any instruments and who randomly decides to make music can be so good at crafting lyrics and beats. This isn't to say that there can't be great songwriters who are only 15 or 16 years-old. Listening to the songs, they do seem like they were written by Carney rather than his teenage protagonist.

Mark McKenna plays Eamon, a slightly older friend who does play instruments and assists Conor in writing songs. This explains away the disconnect with the quality of the songs with the abilities of the characters. With the time-frame probably being a year, again I can accept that these kids concocted these catchy and insightful, pop songs, but I was dubious.

Eamon is the first person recruited to be the first member of the music band that Conor wants to form. Three other students or teens are also recruited. Eamon is given enough screen-time and enough context to fill out his character. The other three aren't given that screen-time or context, aside from one being black. No sense of the band as it relates to the people in the community is provided here either.

The band gets a gig playing at the senior prom. Despite having problems with the school's principal who is also a priest, Brother Baxter, played by Don Wycherley, it seems incredulous that the band would get the gig. However, suspending my disbelief, it would have been better to get a sense of the band's relationship with the other students. Because Conor was aping the looks of other popular bands as he walked into school everyday, it seemed like the other students were aware of what he was doing. I also find it odd that Conor couldn't afford black shoes but he walked into school with a different look and hairstyle everyday?

Ian Kenny plays Barry, the school bully. He has reactions, but he can't be alone in his reactions. Does the band's music exist in a bubble? Conor refers to the senior prom as the first gig, so possibly their music has not been shared at school. As a result, the film feels insulated, which is fine for Conor up to a point because he's myopically focused on impressing Raphina, but that wouldn't be the case for all the other band members.

Jack Reynor (Transformers: Age of Extinction) co-stars as Brendan, the older brother of Conor who had a penchant for music. Reynor is in a really bad wig and his character is rather unnecessary and feels clunky. However, he could and probably was intended to stir or push Conor in certain directions, especially a direction that leads him to doing more with music than just impress a girl but the movie never really makes that connection.

So far, Carney's films have been recognized at the Academy Awards in the Best Original Song category. Here, there are several options that might get the nomination for next year's 89th Oscars. "Up" and "Drive It Like You Stole It" and "To Find You" are all catchy songs that perfectly capture the 1980's style in which the movie is set. That with Adam Levine's track "Go Now" make this movie's soundtrack, if nothing else, one of the best of the year.