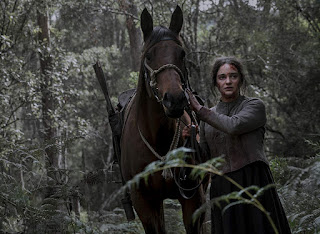 It's possible to pick up what you need to know in this narrative from the context clues. If you're British or Australian, then no explanation is probably needed. However, this film is set on the island of Tasmania in the year 1825. Tasmania is the large piece of Earth off the southern coast of Australia. In the year 1825, Tasmania was at war. As most might know, Australia was a penal colony for the British empire. England would send convicts and prisoners to Australia often to work or perform labor. A lot of the convicts were sent to Tasmania. Unfortunately, from 1820 to 1832, a large conflict known as the Black War was fought between the British colonists and the Aboriginal people who lived there first. It's similar to what happened between the British colonists and the Native Americans, except the Aboriginal people were nearly wiped out in what's described as a near genocide on Tasmania. 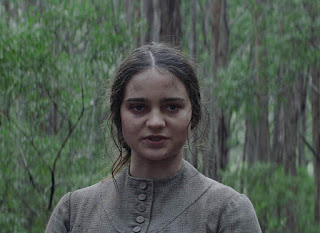 Aisling Franciosi (Game of Thrones and The Fall) stars as Clare Carroll, an Irish convict in Tasmania. She works as a literal maid at an installation where British soldiers live. She also works as a bartender at that same installation where the soldiers hang out and get drunk. She appears to be on a work-release program. She's hoping that once she's done with that work, the British officer in charge of the installation will give her the papers she needs to leave with her Irish husband and newborn baby. In addition to being a barmaid, she also is a pretty good singer. Her stage name is "Nightingale." 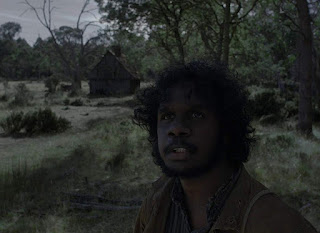 Baykali Ganambarr in his feature debut co-stars as Billy, an Aboriginal person on Tasmania. He's part of a tribe or clan called the Letteremairrener. His clan is from the northern areas of Tasmania, near a town called Launceston. Billy lives near the installation where the British soldiers are. Even though his people are at war with the British, Billy makes money by helping them navigate through the wilderness, avoiding conflict. Unlike other Aboriginal people, Billy speaks English and he keeps the peace by trying to keep the English or the white man, as he calls them, away from the Aboriginal.

It's unfortunate that Billy as a character is borderline close to being what's been described as a Magical Negro, a trope where a black person is used as a narrative device to assist a white character without the black person having much of an inner life or independence of the white person. Kent knowingly or not tries to avoid that trope and that racist trapping, but it's still borderline here and a little too close for total comfort. What happens is that Clare is able to trick Billy into helping her. He's resistant and he's defiant, not afraid to talk back to her and even ditch her in the wilderness, but his role at times comes close to that Magical Negro archetype, even from visual standpoints when he's seen performing a healing ritual. 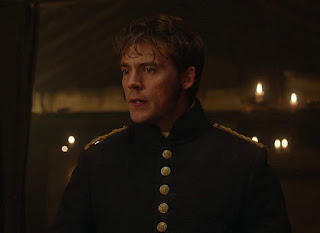 Sam Claflin (Snow White and the Huntsman and The Hunger Games: Catching Fire) also co-stars as Leftenant Hawkins, the British soldier who is in charge of the convicts at the installation on Tasmania. He wants a promotion so that he can leave that installation. He feels stuck there, which he has been for three years. He's the one who is supposed to give Clare her papers, so that she can leave. He perhaps feels that since he can't leave, he won't let her leave either. In addition to basically holding her hostage, he also holds this power over her, which he uses to force her to have sex with him. Without sugar-coating it, he essentially rapes her whenever he wants. He even has no compunction about murdering her husband and baby right in front of her.

He's simply the embodiment of the evil that has occurred in this area during this time period. Specifically, he's meant to be the embodiment of the English occupiers. There is a distinction here made between the English and the Irish where we're supposed to be clear that the English are worse than the Irish, even though the Aboriginal people don't know the difference. Yet, it seems as though the Irish are the only convicts or prisoners in this penal colony, which can't be solely the case, but, historically speaking there did seem to be a kinship between the Irish and Aboriginal people that Kent is trying to reconcile. This revenge story seems to be an extreme way of doing that.

Nevertheless, there have been revenge stories that have been more compelling than the one here. Recently, for example, there was a French film called Revenge (2018) by Coralie Fargeat. That film did a better job of being this thrilling adventure of a woman fighting against men who raped her and try to kill her. This movie isn't as thrilling as it's comprised of Clare and Billy traipsing through the jungle, chasing after Hawkins and spending the better part of the film not catching him. Essentially, the bulk of the film is just surviving the wilderness, finding food and whatnot. In that, it becomes a lesser and more female-driven version of The Revenant (2015). 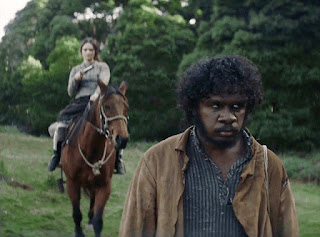 The ending to The Revenant was a bit more satisfying than the ending here. The ending to Revenge was more satisfying than the ending here. Namely, the person seeking revenge gets their revenge. Maybe, Kent wanted to make a different point, which she accomplishes. When Clare catches up to Hawkins, she doesn't kill him. She instead shames him in front of his superior officers and reports what he did, which might get him into trouble. She then walks away, which is a way more powerful conclusion. Yet, that's not the conclusion. The film continues and has Billy strip nearly naked, cover his body in warpaint and go kill Hawkins himself. It's an action that I think undermines the non-deadly revenge we see Clare do and reinforce this prejudice that the Aboriginal people are the savages.

Available on VOD, including Hulu.