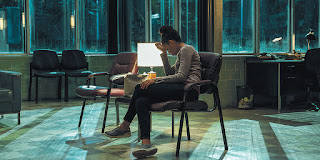 This is the adaptation of the recent Broadway play of the same name by Christopher Demos-Brown, a white, former lawyer from Miami. The play opened on November 4, 2018, nearly one year to this adaptation's premiere. The play ran till January 27, only three months or 16 weeks at the Booth Theater. It's notable because it stars Kerry Washington who was one of only four characters and she dominates the material. The whole thing feels like a vehicle for her. I don't see too many plays, be they on Broadway or not, but, of the few Broadway adaptations that have made it to the big or small screen, this play doesn't give Washington the kind of range as something like Lady Day at Emerson's Bar & Grill (2016) where Tony-winner Audra McDonald gets a range of emotions to play and a range of notes to hit, literally. Washington is mostly two notes here, either scared and angry or her anger often pivots into annoyance.

Kerry Washington (Confirmation and Scandal) stars as Kendra Ellis, a black woman who is a teacher with a doctorate who lives and works in Miami. She's divorced and has one child, a teenage son. The story opens with her sitting alone in the lobby of a police station. It's late in the night and close to morning. It's pouring rain outside. She's constantly calling her son's cell phone. He's not responding and she keeps leaving him voicemails. It's revealed that the car her son was driving had been involved in an incident with police and she's now at the station to find out what the incident is and where her son is. She assumes that he's been arrested and she wants answers as to why because she believes she has raised her son not to get into trouble. 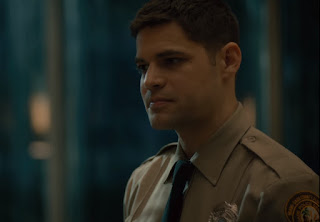 Jeremy Jordan (Supergirl and Smash) co-stars as Paul Larkin, a rookie cop who is on duty at the police station. He's the one who is fielding questions from Kendra and is the first person who is the subject of her annoyance and frustration because he keeps denying her access to information about the incident. He's sticking to protocol, which dictates that he's not allowed to dole out information about the incident. Only a specific officer or a police detective can relay that information. However, there is a suggestion that his reasons for stonewalling her might be more insidious, namely racist. There is a suggestion that he has some racial biases, which he will never truly reveal to her.

It's not to say that Kendra doesn't pick up on them, but she can never say for sure. The bulk of her interactions with him are the result of microaggressions that she perceives. These microaggressions are meant to reveal the first, racial bias and that is how police perceive young, black men. Paul never verbalizes it to Kendra, but that perception is police seeing young black men as thugs, gang members or just potential criminals. Usually, black boys in the eyes of the police are always guilty, even if it's guilty by association. Even their names are perceived as being suspect. 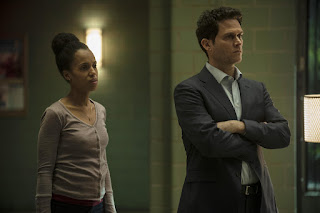 Steven Pasquale (Rescue Me and The Good Wife) also stars as Scott Connor, the white ex-husband to Kendra and the father to her son, which means their child is biracial. He's also a FBI agent. After Kendra has been at the police station for about a hour or so, he arrives. Because of his status and job, he's able to get more information from Paul than Kendra is. Again, there is a racial component to Scott getting that information over Kendra. Unfortunately, this adaptation doesn't nail down how much of the racial dynamics is playing a factor in regard to Paul. Yet, those dynamics and issue with Paul quickly go away, as the whole thing then becomes about mixed race parenting.

It also becomes specifically about identity and how a young biracial man is supposed to identify. It's reminiscent of the recent film Luce (2019), except that film had a slightly different dynamic going on. It also had the young man's point-of-view included in the film. This adaptation doesn't include the young man's point-of-view. This adaptation is told exclusively from the perspective of the parents. That's because this movie wants to be about the conversations that parents of black or biracial boys have to have, specifically in the wake of the Black Lives Matter movement. This adaptation gets to a lot of the nitty-gritty about how parents have to raise their black or biracial boys to behave in order to survive in a world that is more inclined to be biased against them and possibly kill them. 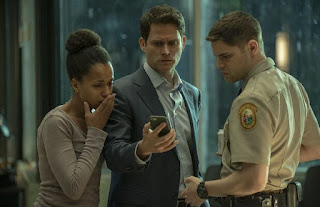 As as result, this adaptation really becomes a deep dive into the emotional underpinnings of Black Lives Matter, but, obviously not about the aftermath. It's more focused on the anxiety of parents trying to avoid having a Black Lives Matter moment. They debate about which is the better tactic or which are the better tools to equip themselves and their black or biracial sons not only to survive but perhaps soar. Some of the debate is generalized and could be applied to any couple of any racial makeup. Scott wants his son to go to college, get a degree and get a more professional job or even join the military. Kendra wants him to pursue either sports or the arts for which their son has a passion. Other parts of the debate is about a child's reaction to the separation or divorce of his parents.

Washington's performance is very breathless and sucks up a lot of oxygen. She portrays a kind of fear that is most specifically unique to black women who are mothers to black or biracial boys. Her fear is a constant worry that has such deep, historical roots in the racism of this country going back decades. It might seem irrational, but, for many black people, the historical racism isn't as historical as white people might believe it is. That racism is very much present. The ending though is such wallowing in that racism and a kind of defeat that I haven't seen in other films or TV shows about Black Lives Matter. Obviously, Black Lives Matter cases in reality do end in a kind of defeated feeling for black families, but there's always a resolve to work to change things. This adaptation doesn't give us that. There's seemingly no hope given here.