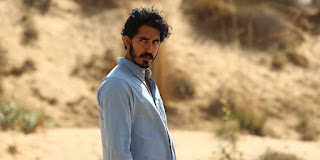 The logline of this film is simply "a mysterious British Muslim man (Dev Patel) on his journey across Pakistan and India. The poster image is of Dev Patel standing by himself in a desert with a fire behind him. That doesn't give the average movie-goer much to consider. The film seems to be hanging its hat on Dev Patel who is perhaps more of a household name in the United Kingdom than here in the United States. Outside of the Bollywood bubble, Dev Patel has to be one of the most prominent or famous actors of India-origin in the world, if certainly English-speaking world. He's one of only three actors of India-origin to be nominated for the Oscar and he's currently the only one under the age of 40 to hold that honor.

Patel has had a range of roles, including a bad guy in The Last Airbender (2010), but this might be the first time that he's playing a bad-ass, a tough guy who has the makings to be the lead in an action flick. His character doesn't start out that way. He plays a man named Jay who has traveled to Pakistan from London, England. He comes across as a twenty-something tourist, nice and unassuming. He's visiting the country to attend a wedding of a school mate. He doesn't speak Urdu, which is the main Pakistani language. The night before the wedding ceremony, the bride is kidnapped. She's stolen right out of her bedroom at gun-point. The question of the rest of the film is why was she taken and if she'll return safely. 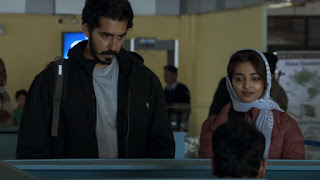 Radhika Apte (Sacred Games) co-stars as Samira, the aforementioned  bride who gets kidnapped. She's a Pakistani woman who has been put into an arranged marriage essentially. She doesn't want to be married. She has somehow made contact with a jewel smuggler and possible thief who can help her get to India and possibly even further away. She clearly doesn't like the culture for women in her country. She clearly wants to live a more liberal and possibly less fundamentalist Islamic life, a life where she can be free to marry whomever she likes or not marry at all or have sex with whomever she wants, as well as not play by any rules she doesn't want to play by.

She thinks that she can use the kidnapping as a way of escaping Pakistan and whatever restrictions or limitations that it might impose on her. However, her kidnapping also resulted in some trouble with the police. Now, the police are on the hunt and if she's found, she would have to return or confront her so-called friends and family who will wonder what happened to her, which she might not want to do. After a point, the film, written and directed by Michael Winterbottom (The Trip and A Mighty Heart), becomes about what Samira will trust to do and what she's willing to do to get away. 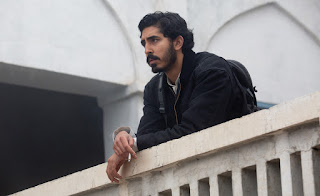 What's a twist that happens early in the film is that Jay turns out to be the one who is the kidnapper. He's a kind of mercenary. Yet, the kidnapping was all arranged by Samira herself. His is meant to be a quick job, but when plans fall through in India, Jay and Samira are forced to stay together on the run from the police. The two become like a Bonnie & Clyde only not as violent, though some violence is involved. What it becomes in lieu of the violence is an intense romance. Patel had already established himself as a bit of sex symbol thanks to his role in Lion (2016). Here, he certifies that sex symbol status, as his scenes with Apte are on fire.