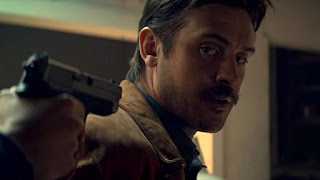 Director Jim Mickle (Cold in July and We Are What We Are) is doing a grimy, murder mystery that eventually builds to a science-fiction premise. Science-fiction elements are introduced early and slowly build over the course of the film, but the full sci-fi premise isn't unveiled until the very end. That unveiling presents an idea that is provocative and is attempting to speak to our times. Yet, its relevancy exposes what this movie thinks is morally triumphant but might be morally reprehensible.

Boyd Holbrook (The Predator and Logan) stars as Tommy Lockheart, a police officer in Philadelphia in the year 1988. He has a wife who's pregnant. His brother-in-law is a detective in the Philly police department. Tommy is called to the scene of a crime that his brother-in-law is investigating. Tommy is eager to become a detective too, so he takes note of the details of the crime. Later that night, Tommy follows his brother-in-law to another crime scene that has the same details. Tommy reasons that the separate deaths are by the same person, a serial killer. There was an eyewitness who saw the suspect, so Tommy searches for the serial killer. He learns the serial killer is a young black girl.

Nine years later in 1997, Tommy is a detective and murders that were similar to the 1988 murders start to happen again. Tommy reasons that it's the same serial killer. Tommy tracks the killer and while he and everyone else has aged, the killer looks exactly the same, but she gets away again. Nine years later in 2006, similar murders happen and it's the same killer. It's at this point that Tommy is chasing not only a serial killer but a time traveler. Written by Gregory Weidman and Geoffrey Tock, the movie shows a bit of the science-fiction that proves this time-traveling stuff, but the real question is who is this time traveler and why is she killing these people.

The answers to those questions are not only spoilers, but they also represent my chief problems with this movie. It's those answers that Weidman and Tock think are some kind of morally triumphant statement. The way that Mickle directs it is to make those answers feel glorious or justified. However, I don't believe or feel that they are glorious or justified. I feel those answers are actually morally reprehensible. I suppose that it's bold of the filmmakers to make that case and I think that I understand what they were aiming to do. I think they were trying to be topical and relevant, particularly with the concept of white supremacy and white nationalist terrorism, but where the filmmakers go is just wrong-headed. 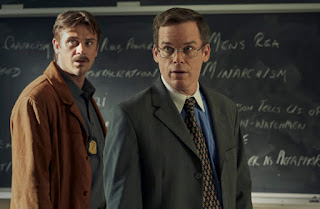 Michael C. Hall (Dexter and Six Feet Under) co-stars as Brian Holt, the aforementioned brother-in-law. He starts off as a detective. He advances to a lieutenant and then eventually the chief of police. He's the sensible cop who is investigating the murders. He mainly stands as the annoyed and angry counter-balance to Tommy's brazenness and ambition, or what some might call obsession. Unfortunately, he's one step behind Tommy, but he's also the one to question Tommy's sanity. He's the tool that the filmmakers use to indicate that maybe this movie is gas-lighting us and making us think that maybe the time traveler isn't real or is just a regular copycat.

Otherwise, Mickle does a good job of creating the period details to make us feel like we're in 1988 or 1997. The action sequences are also fairly well done. The signature sequence is a pretty incredible van crash, involving flying pigs. It's gross, scary and pretty thrilling. Unfortunately, the ending undermines those thrilling moments.

Tommy learns the serial killer is his granddaughter. She's a young black girl born in 2015 or specifically she's of mixed race. Tommy is white but his son-in-law is black. The reason she's traveling back in time to murder people is because of a terrorist attack that happens in 2024. Apparently, it's a massive attack, possibly nuclear. Decades later, a scientist who ironically is either Middle Eastern in heritage or Southeast Asian in heritage develops the technology to time travel. That scientist sends Tommy's granddaughter back in time to kill the people who they believe are responsible for the terrorist attack. Yet, they're killing not the people who physically perpetrated or implemented the attack. They're killing the people who inspired, nurtured or furthered the ideas of the terrorists.

This is where the film goes off the rails and is reprehensible. The terrorists are coded as being white nationalists and possible white supremacists. The problem is that the film is advocating something that was disputed in Steven Spielberg's Minority Report (2002). That film is about arresting people and putting them into prison for crimes that they haven't committed but were thinking about committing. This film goes even further and says people should be killed for not only thinking about committing crimes but inspiring others to think about committing crimes.

When Tommy learns the truth about what his granddaughter is doing, he argues that there has to be another way of stopping the terrorist attack other than murdering what are technically innocent people. Yet, the film advocates that these people should be killed and that's morally reprehensible. It would be like being on the side of the robots in The Terminator (1984) and Terminator 2: Judgment Day (1991). The TV series Lost (2004) also dealt with this idea, but even that series argued that going back in time and killing Hitler as a youth before he could commit horrible atrocities is wrong. Yet, this film advocates not only killing Hitler but killing all the people who inspired him, which again is reprehensible and I can't believe it advocates such reprehensible stuff. It would be one thing if the movie shows us who those people actually were and how they inspired the eventual attacks, but we don't even get a clue as to who they are.