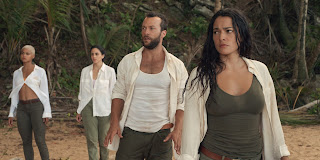 Obviously, this limited series is a rip-off of ABC's Lost (2004). It's about a group of people stranded on a deserted island. They have to survive, but a lot of mysterious things happen that are fantastical. Things turn deadly and people start to die. That 2004 series was very skillful about developing its characters and being empathetic toward them. A lot of the characters are flawed. Some are even criminals. Understanding them and even redeeming them were chief goals of Lost. This series attempts to do the same thing. There are some differences that make it even more mysterious and even more like Black Mirror (2011). I'm not a huge fan of Black Mirror, but this series doesn't even rise to the level of that 2011 British show. I am a fan of Lost, and this series doesn't even come close as being as interesting or as compelling as Lost. Aside from two characters, this show doesn't care at all about the other eight, seeming protagonists that get introduced.

Natalie Martinez (Under the Dome and CSI: NY) stars as Chase, a woman who wakes up on the beach of a deserted island, probably a tropical island. She has no memory of who she is and how she got on the island. All she knows is that a seashell was next to her where she woke up. She meets another girl who is dressed like her and also has no memory of how she got on the beach. Chase meets eight other people also dressed like her with amnesia of who they are and how they got there. She starts to explore the island and she starts getting clues that something strange is happening, but no one believes her. 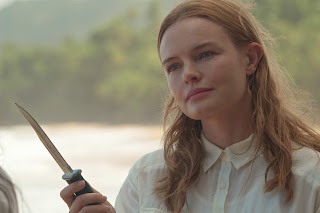 In Lost, the people on the island have their memories, so there were flashbacks early on that revealed their back-stories. They were in a plane crash and they saw their stranding as an opportunity to start over or else they were resigned to make life on the island their new normal. Some wanted to wait for rescue, even after some time rescue seemed really unlikely. This series seems like it could go in that direction, but, the third episode takes a twist that undermines the potential of being a companion of Lost.

Kate Bosworth (Superman Returns and Blue Crush) co-stars as KC, a woman who also wakes up on the beach of the same deserted island as Chase. She wakes up with a knife next to her. She's very confrontational toward Chase. She seems to not like her or trust her for some reason. Otherwise, she doesn't really engage with any of the other eight people on the island. When she does get her memory back and she remembers what she did that landed her here, it still makes no sense as to why she behaves toward Chase the way that she does. She seems to be a rival toward Chase for no reason. 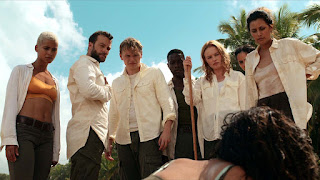 As mentioned, there are eight other people. Unfortunately, most if not all of them don't matter. The cast of Lost was very large and it was about over 40 people who were stranded on an island. With that many people, it's impossible to make all of them matter. The cast here is only 10. With that smaller a cast, it's possible for a series to make them all matter or matter more than they do here. As the series plays out, it becomes clear that those other eight are really disposable and don't play a huge role to the ultimate plot. When so much of the characters and show are so disposable, it's really difficult to care about any of this show as a result. 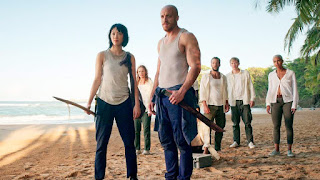 It's revealed that Chase and the others really aren't on an island. Like out of an episode of Black Mirror, Chase discovers that she's in a virtual reality simulation or VR simulation. It could also be akin to The Matrix (1999). Chase and the others are hooked into a machine where their bodies are in a pod in some laboratory and their minds are the only thing active. They believe that they're on an island and it seems absolutely real.

It's also revealed that they're all convicted criminals in Texas and the reason they're in the VR simulation is because the State of Texas is testing a program to see if criminals can be redeemed or rehabilitated. The series then suggests that it's about that same idea, of testing if criminals can be redeemed or rehabilitated, which is an interesting concept, but the twists in the plot undermine that theme and the exploration that could come from it. 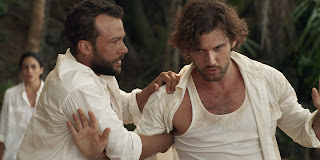 For example, as mentioned above, the characters other than Chase and KC are disposable and don't get any space to explore those possibilities. We learn that most of them committed horrible crimes, but, instead of delving into the psyche of the characters and providing opportunities for the characters to reflect, the series just makes those characters lame fodder to be dispatched. Alex Pettyfer (Magic Mike and I Am Number Four) is a prime example of that.

Yes, the series dives into Chase and KC's pasts. Chase is used just as a plot-device to expose what could be corruption in the criminal justice system. She's also used to expose biases and prejudices with regard to people in prison. KC's character is set up for a redemptive arc. More than anyone else, KC confronts her past. The series just doesn't do anything to have her reckon with it in the present or on the island as it were.