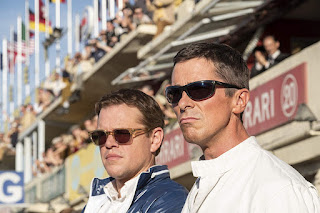 It's not unusual for a film to have a different title in another country. Sometimes, this has to do with translating the title of a film in a foreign language to English or vice-versa. Literal translations sometimes don't make sense or reflect what the movie is about. This is only a problem in terms of marketing and what people in the marketing department of a movie studio think will sell a movie or communicate the main idea to potential audiences. The title of this film is yet another example. In the United States, Canada, Australia, Brazil, India, Russia and Vietnam, the title is that of the two major car companies depicted in the film, the American company versus the Italian company. In the United Kingdom and much of Europe, the title of this film is Le Mans '66, which is the name of the sports-car race depicted here. It shouldn't be confused with the Steve McQueen film Le Mans (1971). In Mexico and Argentina though, the title of this film is Contra lo imposible, which translates to "against the impossible," which is what the protagonists in this film feel like they're facing.

I mention this small factoid only because of one moment that I felt uncomfortable. For American audiences in particular, the idea is that it's an American car company versus an Italian car company to see who can win and who can be the fastest. Obviously, the film puts us on the side of the American company and putting its name first makes sense. It becomes a sense of nationalism and pride, which is probably a better tool to use in order to market a film in the USA. However, that tool isn't as handy to international audiences. Indeed, the film is less about American nationalism, as it is about what most sports films, even sports-car films, are about, and that's athletic determination. It's slightly different because it's not about building up the physical body, although a driver's health is important, but it's about building up a mechanical device and pushing that machine to its limits. This is the first film that made me understand and feel that literal and figurative drive. 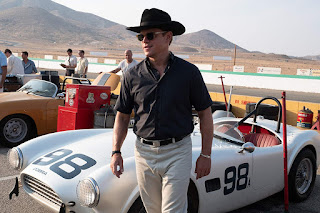 Matt Damon (The Martian and Good Will Hunting) stars as Carroll Shelby, a man from Texas who was a race-car driver and automobile designer. Shelby was known for being one of, if not the only American at the time to win the 24 Hours of Le Mans. The 24 Hours of Le Mans is the world's oldest sports-car race that's still active. It's held in Le Mans, which is in northern France, about three hours southwest of Paris. The film doesn't explain the race all that well, but it seems to be a race that is literally 24 hours in length and it is regarded as the Triple Crown of Motorsport. Shelby won that one crown in 1959, but he had to retire soon after that due to a heart condition. He started his own motor company, selling cars that he designed. He also occasionally did work for the Ford Motor Company.

In the 1960's though, the Ford Motor Company was having trouble. Sales were not what the head of the company wanted or liked. The Vice President of the company, Lee Iacocca, played by Jon Bernthal (The Wolf of Wall Street and The Walking Dead), has the idea that in order to put Ford back on the map, the company should enter races like the Le Mans and do everything they can to win them. Eventually, this leads him to Shelby who is the only American that Iacocca knows who won Le Mans. 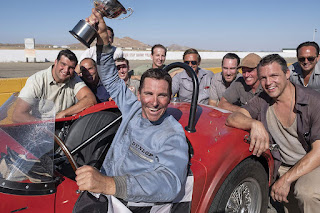 Christian Bale (The Big Short and The Fighter) also stars as Ken Miles, a British veteran of World War II who like Shelby became a professional race-car driver. He mainly worked as an engineer, knowing the insides of a car and a car's engine with an insight and knowledge that is almost supernatural. His super-power is that he can tell everything that is wrong with a car, certainly by driving it and practically just by looking at it. He has his own garage in Los Angeles. He's married and has a son named Peter, played by Noah Jupe (A Quiet Place and Suburbicon). He does work for Shelby in helping to design automobiles for races, but he's not above breaking rules and telling people off, even if they're his own customers.

When Iacocca offers Shelby money to help Henry Ford II, played by Tracey Letts (Lady Bird and The Post), win the Le Mans, Shelby knows that he's going to need Miles to be the one testing the engine, as well as being the one to be the driver for Le Mans. Shelby's problem is convincing the executives at the company to let him test the engine and run the race, as he sees fit. Iacocca is pretty much already on his side. The true push-back comes from Leo Beebe, played by Josh Lucas (Sweet Home Alabama and Glory Road). Beebe is an executive who has more sway at Ford and more power than Iacocca. Beebe doesn't take a liking of Miles because Beebe doesn't see Miles as a "company man." 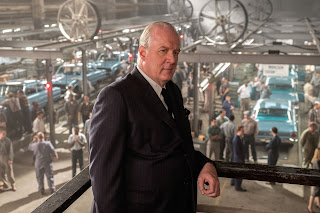 He doesn't see Miles as conforming to the company's brand, style or image. It's a kind of classism or elitism. Shelby has to be the man who stands in between. He has to stand between the men like Miles who are in the pit and who work not only on the car but under it. He has to stand between those guys and the men like Beebe and Ford II who are perched above those men, looking down on them. Those perched men are the men in suits in offices on top floors and in the sky boxes above the raceway. It's a power struggle between the men with grease on their fingers and the men in suits. It's a struggle between the working class and the white collar. It's classic, but screenwriters, Jez and John-Henry Butterworth, as well as Jason Keller don't make the struggle stale or old-worn. The dialogue and drama are wielded in a classic way to make each character and each scene punch, often with small dramatic surprises that make the scenes of people talking as thrilling and intriguing as the racing scenes.

Director James Mangold (Logan and Walk the Line) also helps to keep those scenes punchy as well. Most will probably comment on his handling of the racing scenes. I can't speak to those scenes on a technical level, but it works well enough to immerse the viewer in that driver's seat with Miles. Depending on theatrical presentation, which I saw in IMAX with a great sound system, the audience will feel every turn of the wheel and every jolt of acceleration as the race cars take off. As vehicles at high speeds do occasionally, there are crashes and Mangold does a good job of making us feel every hit. There's seeming more weight and gravity to it than a lot of more recent entries in The Fast and the Furious franchise. 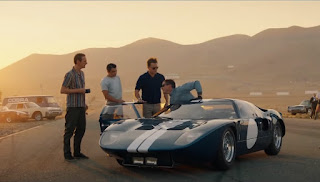 At the end of the day, the relationship between Shelby and Miles is paramount. If that relationship doesn't work, then the film doesn't work. Damon and Bale though nail it. They are superb. They're strong. The film perhaps stumbles with depicting Shelby's life outside of his job and his work, but it all boils down to his friendship with Miles. In that, it roars louder than the loudest race-engine, even one turning at 7,000 rpm.