Man of Steel is Zack Snyder's sixth feature film as director. I haven't liked any of his previous works and this one didn't win me over.

The obvious place to start is with Henry Cavill (Immortals and The Cold Light of Day) who stars as Clark Kent aka Superman, an alien from a planet called Krypton who looks human but has a ton of super powers like strength and flight. Clearly, Cavill has the body to be Superman, but I don't think he has the charm or the humor to be Clark Kent. If he does, it's not on display here. The film in general with its screenplay by David S. Goyer and a story credit by Christopher Nolan is devoid of humor. Clark Kent is 33-years-old in this movie and we can only assume, from what we see or rather from what we don't see, that he's had no friends ever, no girlfriends ever, no anything but a reclusive existence on his adoptive parents' farm.

If anyone has seen 42, the biopic about Jackie Robinson, one key theme was the idea of not fighting back. In this film, the same theme pops up that Clark shouldn't fight back against bullies. His father, Jonathan Kent, keeps hammering the argument that he shouldn't fight back, else he might reveal who he is and that he has these powers. All of that is challenged when General Zod, a military psycho, also from Krypton, leads an alien invasion to Earth. All through the movie, we see Clark get bullied time and time again and he has to hold back retaliating, which is fine, but his reluctance to kill General Zod at the end is baffling.

Zod reveals that he's going to commit genocide of the entire human race. Yet, Superman hesitates and then cries over the fact that he has to kill Zod. Why? As I watched the fight scene between Superman and Zod, which goes on too long, I thought to myself that Superman must realize that punching and throwing Zod all around the city resulting in that city's total destruction wasn't really going to hurt Zod who has the same powers. Just as Christopher Reeves' Superman realizes it in Superman II (1980), I don't get why Henry Cavill's Superman doesn't realize that he was only destroying the city and putting people's lives at risk, as we see with Perry White, played by Laurence Fishburne. White's life is endangered as a result of the carnage and destruction caused by Superman and Zod's fight. Superman is either ignorant or totally disregards this, and I don't get how or why. Their fighting brings down a lot of buildings. We don't see how many countless people die. Yet, Superman has the nerve to cry over Zod's death. Why?

The ending is akin to the ending of Transformers: Dark of the Moon (2011) or The Avengers (2012), which Hollywood movie makers seem to think people want. The money those movies earned in the box office would indicate yes.

Given the way the film starts, I thought we were going to get a more sci-fi, space adventure version of Children of Men (2006). What it ends up being instead is War of the Worlds (2005). Snyder unfortunately takes us from a giant dragonfly to some really bad child acting. I'm sorry, but Cooper Timberline who plays Clark Kent at age 9 and Dylan Sprayberry who plays Clark Kent at age 13 give bad performances. Either because of bad direction or bad screenwriting, but check out Moonrise Kingdom (2012) or Mud (2013) for better child acting.

Again, I'm not a fan of Snyder's directing, but I might have to call foul on the screenplay. Case in point, Krypton is so technologically advanced that it can create space ships that settled colonies or outposts on other worlds and it can send people to a "phantom zone" or basically to another dimension, but Jor-El tells them to evacuate their planet because it's about to explode and the leaders respond with the idea that evacuating the planet would be impossible. Going to other dimensions is apparently possible, but evacuating the planet isn't?

I like how Amy Adams who plays Lois Lane discovers that Clark Kent is Superman almost immediately. What I didn't like is after The Thing (1982) and The X-Files (1998), I'm sick of space ships encased in ice. I also quickly grew to hate Snyder's frequent snap zooms again giving a faux documentary feel that didn't gel with the CGI-heavy artifice that dominated many scenes.

Two Stars out of Five.
Rated PG-13 for intense sci-fi violence, action and destruction, and for some language.
Running Time: 2 hrs. and 23 mins. 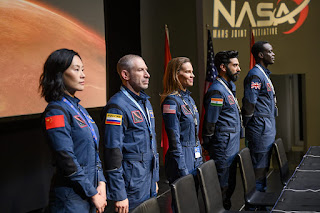