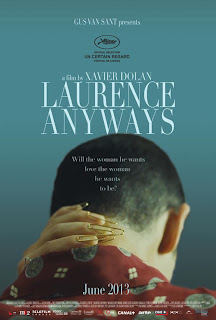 Melvil Poupaud plays Laurence Alia, a 35-year-old school teacher. Suzanne Clément plays Frédérique or Fred, his wild and crazy, redheaded girlfriend for two years. Everything seems happy and fun, but Laurence gets more and more depressed rather quickly. One day after exploding in a car wash, Laurence makes a shocking confession to Fred. Laurence says he's not gay, but he points to his bicep and to his groin and says these things aren't me. He says, "It's disgusting," implying his penis. Basically, Laurence reveals that he is a transsexual. He was born male but wants to be female.

Writer-director Xavier Dolan makes Laurence the titular character and Laurence has many key moments, but it's clear that the movie is really about Fred and her reactions to Laurence's transition and whether or not she will remain in a relationship with Laurence. This is perhaps purposeful because unless you're actually transsexual, which Dolan is not, you can't truly know what it is or what it feels like to be transsexual. Therefore, the only story or the only perspective Dolan could have is Fred's.

This is a shame because Laurence is the titular character and getting inside his, soon-to-be-her head is the bigger draw. Dolan never really does. He gives Poupaud great scenes in the battle against the kind of discrimination and intolerance that transsexual people face not only from strangers but also from friends and family.

Yet, these scenes are strictly external, always from the outside looking in. Dolan doesn't provide us, except for that initial confession, which only scratches the surface. Dolan doesn't provide us with much that is strictly internal or that gives a sense of what it is to be Laurence from the inside looking out. Aside from not liking his muscles or his penis, I don't understand for Laurence what it feels like to be a woman.

It's never good to define something with a negative. The answer to the question of what a woman is can't or shouldn't be "not a man." Laurence wants the predictable or stereotypical things like wearing bras and panties, as well as applying makeup. For Dolan, who is seemingly more progressive, it's odd that he would succomb and not challenge these stereotypes. By the end, Laurence looks like a dude with long hair, in makeup and a dress. Is this what Dolan thinks being a woman is? Don't we tell young girls that their womanhood is not contingent on how pretty or colorful their hair and face are? Or, is Dolan saying that being a woman is that superficial?

The problem is that, in the post-feminism and post-gay world, defining manhood and womanhood is increasingly difficult. Is Laurence a woman because he has long hair and wears dresses? Does that make Ellen DeGeneres not a woman? Reducing womanhood to what's on the outside seems very shallow. It also seems more about appearing to be a woman rather than actually being one.

The opening sequence and a subsequent scene involve Dolan's camera looking at a series of people who are looking at Laurence. This is the truth about this movie. It doesn't matter what Laurence feels. All that matters is what people see. If that's Dolan's takeaway, then it's a sad message about self-identity as through other people's perceptions. There have been other films that have dealt with this issue. Transamerica (2005) is one example, but that film was more about parenthood and didn't feel as shallow and superficial as this one.

Two Stars out of Five.
Not Rated but recommended for mature audiences.
Running Time: 2 hrs. and 48 mins.