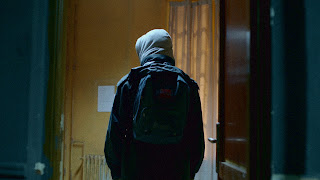 This documentary follows in the tradition of The Thin Blue Line (1988), Man on Wire (2008) or Catfish (2010) in that it's a non-fiction story constructed as a thriller. Filmmakers like Errol Morris perfected this technique. Echoes of which are even present in Morris' lighter fare like Tabloid (2010). The Imposter isn't exactly lighter fare, but it's a crime story that's about a step or two below Tabloid. It does include a kidnapping mystery, but the thrust of its plot is not necessarily mysterious. It's just an incredible circumstance or situation that it is so unbelievable that if it weren't true, no one would buy it. But, in the Errol Morris manner, director Bart Layton has his subject speak directly into the lens. As was the case with subjects like Robert S. McNamara or Joyce McKinney, the subject here is so captivating and articulate that even if Layton's subject wasn't telling a real-life tale, any listener might still be inclined to accept anything he says, or one might simply be entertained by the sheer audacity of this person.

Layton's subject is actually two people but both go by the name Nicholas Barclay. One of the persons was born as Nicholas Barclay. The other person wasn't but came to steal that name. The person who was born as Nicholas lived to be 13-years-old before he disappeared in 1994. The person who pretended to be Nicholas did so in 1997 and pulled it off for a year. How this phony did it are the details and crux of this movie.

Listening to it at first, I was immediately reminded of Clint Eastwood's Changeling. In that Oscar-nominated, 2008 film, Angelina Jolie plays a mom whose son vanishes and later the authorities say they've found him but in reality the boy who returns is not the original son. The Imposter is essentially Clint Eastwood's Changeling, except instead of authoritative conspiracy, Layton dabbles in authoritative incompetence.

Both Eastwood and Layton exemplify how grief and loss can affect the human mind and its perceptions. Both show how far a person will go in the name of that grief and loss, often in desperate attempts to come to terms. What's incredible is like Tabloid (2010) or Man on Wire (2008), Layton gives us the rather, remorseless perpetrator on a silver platter.

It can be easy to empathize with this perpetrator, but Layton also gives us the grieving victims, so as to always maintain some perspective. He also gives us commentary from the federal authority figures involved. The second Nicholas would be capable of pulling the audience onto his side, but what's good is that Layton circumvents allowing the second Nicholas to give any sob story as to why he's doing this. He doesn't allow for much sympathy for him.

It's still sad that the first Nicholas is completely lost in the shuffle as the movie does become all about the second Nicholas. It's sad anytime that anyone thinks of this story, it will always be over-shadowed by the crazy pretense that was done and the answer to the question of what happened to the first Nicholas might never come.