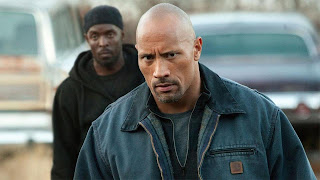 Despite being based on a true story, the premise to this film seems pretty ridiculous. The script by Justin Haythe and Ric Roman Waugh is all about mandatory minimum sentencing for certain crimes, but another legal rule that they could have criticized is entrapment. In the opening of this movie, a young man is setup. Any real cop would look at this young man and determine he is hardly a person that deserves to be put in prison for ten years. Yet, the young man named Jason Collins is the victim of entrapment. Yes, Jason committed a crime, but he wouldn't have if the DEA hadn't set him up.

Mandatory minimums can be egregious, but not more so than entrapment because in this case in particular the government isn't stopping an already established criminal. The government is creating a one-time offender whose life is going to be ruined for no good reason than to give the DEA something to do. If this were an episode of The Good Wife, I feel like this is where the fight would have been, going after the government for entrapment. Julianna Marguiles isn't the star here. The star is Dwayne Johnson, so sitting in a court room isn't going to cut it. Johnson is a man who demands to be out somewhere getting into action.

Dwayne Johnson plays John Matthews, the owner of a construction company in Missouri who is Jason Collins' father. All of Johnson's scenes with Jason, played by Rafi Gavron, is done after Jason is arrested and is in prison. Johnson is known more for his WWE personae "The Rock" and in most of the movies that Johnson has done, he's basically played that personae and not much more. In this film, Johnson breaks from that and gives what is considerably his best acting performance. This comes through in particular with the scenes between Johnson and Gavron.

I'm not ready to give Johnson an Oscar nomination, but this movie is a huge step forward. The thing with his "The Rock" personae is that it's all contingent on Johnson's physicality and the fact that he is this tall and hugely muscular, and very handsome man. Director Ric Roman Waugh tones that down and strips Johnson of that physicality.

Waugh still throws Johnson into action scenes, but the action isn't the kind of action found in Fast Five (2011). It's not cartoonish or over-the-top. The action here is more down-to-earth and feels authentic and more real. Instead of portraying him as Superman, which movies like Fast Five do, Waugh portrays Johnson as Clark Kent. We see genuine fear in Johnson's body as well as his face, and thanks to the touching moments with Gavron, we empathize with him and love him more.

Aside from Susan Saradon (The Client and Dead Man Walking) who's no stranger to these legal dramas, there are actors like Barry Pepper in the cast that also know a thing or two about getting movie-goers to empathize with him. There's interesting typecasting by way of Michael K. Williams who plays a mid-level drug dealer and Benjamin Bratt who plays a kingpin, but the real standout is by far Jon Bernthal who like Williams and Bratt came from a hit TV show, which showed how sexy and scary he can be.

Jon Bernthal (The Walking Dead) plays Daniel James, an ex-con who works for Matthews' construction company. From my knowledge, Bernthal isn't Hispanic, but his character Daniel James was envisioned as a Latino. Mexican-American actor Michael Peña was originally cast to play James, but then dropped out. Bernthal stepped in and seemingly nothing about the character was changed. Often, roles are tailored to fit the actor, but Bernthal doesn't skip a beat.

James' family is and looks Hispanic, more so than him, but Bernthal's performance is so good that you buy him as Hispanic. He speaks Spanish. He doesn't have an accent, but the way he weaves the language is subtle but is enough to convince that he could be fluent. Bernthal's scenes with the little boy who plays his son mirror those scenes between Johnson and Gavron.

It's also through those scenes that this movie is really all about fathers and sons and what men are willing to do to protect and provide for their children. This theme is echoed in other ways as well. Waugh doesn't hit you over-the-head with it but integrates it effectively. Waugh also wields great camerawork for his final action scene, which could be considered a typical, car chase scene, but the way he stages and shoots that scene makes it much more visceral and engrossing.

Five Stars out of Five.
Rated PG-13 for drug content and sequences of violence.
Running Time: 1 hr. and 52 mins.