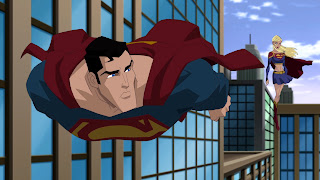 Warner Bros. Animation has been producing direct-to-video features of the popular DC Comics books since 2007. This is the 16th feature in that series. It's the adaptation of the recent graphic novel "Superman: Brainiac" by Geoff Johns and Gary Frank. Directed by James Tucker and written by Bob Goodman, the story sees the man of steel battling Brainiac, a cyborg control freak from outer space and through that fight, Superman learns that he too is perhaps a bit of a control freak from outer space.

Goodman picks up with Superman doing what he does best, rescuing Lois Lane from bad guys. Lois Lane is a reporter for the Daily Planet, the major newspaper in the fictional city of Metropolis. She's always getting herself into trouble because she always has to be in the thick of the story. She's brash and cocky about it, seemingly because she knows Superman will save her. As we quickly discover, this is in part due to Superman having the alter ego of Clark Kent who works along side Lois, but also in part due to Superman being in love with Lois and in an actual relationship with her.

Superman obviously can't stop Lois from doing her job, but, in terms of their relationship, he has her keeping it secret. He finds it important to maintain the deception of Clark Kent and Superman being two separate people. He thinks it's safer to keep that distance not only from the world but also from Lois.

When Superman encounters Brainiac, he's taken aboard Brainiac's vessel. Superman learns that Brainiac is a collector. Brainiac destroys planets with huge populations, but not before he kidnaps a city. Brainiac shrinks the city until it's small enough to fit into a glass jar. He then puts the jar on his ship and annihilates the planet where it used to be.

Superman finds that a city from his home planet of Krypton is on board Brainiac's vessel. The city is Kandor, which is also the city where Superman's cousin Kara lived. Once Brainiac figures out that Superman and Kara came from Krypton and now reside on Earth, Brainiac wants to make them and Metropolis a part of his collection.

Throughout DC Comics history, Brainiac is explained to have a dozen or so different histories. In Superman: The Animated Series, Brainiac was even explained to be created on Krypton. This version has Brainiac as a complete alien to both Krypton and Earth. It's strange because despite that, there's some key things in common that Superman and Brainiac share. Brainiac is psychotic and his collection is his sick way of appreciating those cities and also exercising absolute control. Superman even points out to Brainiac that for the alien cyborg, it's safer for him to keep the distance that he keeps from his collection and the people in it.

Like any good villain, he or she should be a reflection or perhaps a refraction of the hero. It helps to develop the hero as a character, and as a protagonist that is effective. The writing done for Kara, aka Supergirl, is well done too.

The vocal performances were well done, particularly Stana Katic who plays Lois Lane. I'm familiar with Katic's voice because I'm a fan of her TV series Castle. What I thought was interesting and a bit of an ironic joke is that a Daily Planet employee makes a crack about Clark Kent being gay. It's ironic because Matt Bomer voices Clark Kent and Superman here, and Bomer is himself openly gay.

It's one step closer to having a gay superhero in a feature film. There was the moment in Bryan Singer's X2: X-Men United (2003) when the character of Bobby Drake tells his parents that he has supernatural powers, which some people have equated to being similar to a gay person coming out, but not much since then. The fact that this movie addresses the issue makes it ahead of so many others.

Five Stars out of Five.
Rated PG-13 for sequences of violence and action, and a rude gesture.
Running Time: 1 hr. and 15 mins.