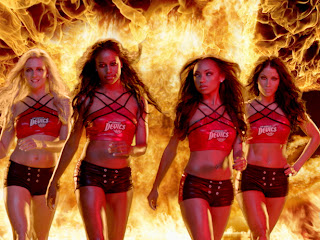 A couple of years ago, VH1 created the TV series Single Ladies. It was about three African-American women in Atlanta and their love lives. It was like a black version of Sex and the City. Obviously, it appealed to African-Americans or to those who appreciated R&B and Hip Hop music. Hit the Floor seemingly capitalizes on Single Ladies in terms of playing during the summer and appealing to the same demographic by way of centering on African-American women or women of color, various ages, again being sexy but integrating the R&B and Hip Hop music aspect and elements more so than Single Ladies did.

Taylour Paige stars as Ahsha, an aspiring dancer who auditions to be a cheerleader for the Los Angeles Devils, the basketball team in this fictional, soap opera world. The cheerleaders are known as Devil Girls. Ahsha wants to audition in part because she loves dancing and is good at dancing but also in part because her mom, Sloane, played by Kimberly Elise (Woman Thou Art Loosed and Diary of a Mad Black Woman), was part of the Devil Girls when she was younger.

The current captain of the Devil Girls is Jelena, pronounced YA-LAY-NA. She doesn't like Ahsha. Maybe she thinks Ahsha isn't pretty enough or doesn't have the talent or charisma, which she might have a point, but everyone else recognizes Ahsha's skills. Jelena, played by Logan Browning (Meet the Browns), is herself very sexy and talented but she is a bit of a control freak. She rides off her initial behavior as hazing, but as episodes go on, she is painted as more of a bully.

During the auditions, the coach of the Los Angeles Devils, Pete Davenport, played by Dean Cain (Lois & Clark: The New Adventures of Superman), is one of the judges. It's not until after the auditions that Pete learns from Sloane that he's Ahsha's father. He wants to talk to her and have a relationship, but things are uneasy.

The one guy who isn't uneasy about talking to Ahsha and taking every opportunity to hit on her, make advances, flirt and stalk her is Derek, played by McKinley Freeman. He even goes as far as stripping naked in a way that allows her to see everything. Derek, however, is too much of a playboy. Sex and alcohol seem to be his addictions, much to the chagrin of fellow players like Terrence, played by Robert Christopher Riley, as well as Pete.

Coming off Single Ladies, and continuing what's shaping up to be an interesting TV career, Rick Fox is featured as a former NBA player who is now married to the director of the Devil Girls, Olivia, played by Charlotte Ross. Olivia is basically the manager and in charge of the business operations of the cheerleading team. Rick Fox is Chase Vincent, Olivia's husband and basically her sounding board. Fox is a former NBA player in real life and on this show, so he's a source of credibility. He added the same kind of credibility to a basketball storyline on HBO's Oz. He has potential, but right now he's just the boyfriend.

Another actor who's just the boyfriend is Jonathan McDaniel who plays German Vega, the youngest gym teacher I've ever seen. There's not much to his character, aside from being loving and sweet and a sounding board for Ahsha. In so many movies and TV shows, you'll have many women relegated to this veritable non-role, but after having seen McDaniel recently in the movie In the Hive, I'm willing to hang on for him.

Yet, the draw here isn't the men. The draw here is the women. If you're going to tune in, you're tuning in to see hot chicks doing sexy routines in tight outfits. It perhaps has the same appeal as So You Think You Can Dance, just as Glee had the same initial appeal as American Idol. Instead of watching young people sing pop songs, it's watching young people shake their booties to pop songs.

Like with Glee, I wasn't sold until the very end of the first episode when the Devil Girls perform their first musical number. That musical number is Beyonce's "Run the World." Subsequent performances are all very entertaining and well choreographed. I don't see much of a future unless the show does what Glee does and expand the soap opera beyond Ahsha and Jelena, and allow us to get to know the other Devil Girls who are right now faceless background dancers. In the interim, I'll just gawk at all the booty shaking to uptempo tracks.