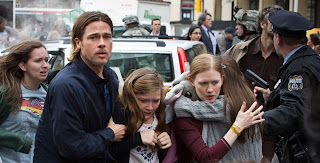 It's Brad Pitt in a zombie movie! He's already been in a vampire movie, so why not? Weirdly though, the majority of the zombies are CGI insects that we see from helicopter shots or from telephoto lenses. Director Marc Forster keeps the audience at a distance from the monsters. It's not until the very end do we get to be nose-to-nose with a zombie. While this helps to achieve ridiculous shots and allow the zombies to be manipulated with the spryness of any cricket or grasshopper, cockroach or even fly, it removes that tactile nature and visceral disgust in which the TV series The Walking Dead revels.

At first, when Brad Pitt who plays Gerry Lane, a former U.N. investigator-turned-family man is caught in Philadelphia traffic with his wife and two daughters, the initial attack is reminiscent of War of the Worlds (2005). You're not really sure what the threat is. Is it terrorism? Some minds in Boston might harken back to the recent marathon bombings, but quickly you realize it's instead the prequel to 28 Days Later (2002), yet set in the City of Brotherly Love, or rather brotherly cannibalism.

The rest of the movie is Brad Pitt moving from set piece to set piece, so that he can run from or in one scene ride a bike away from madly jumping zombies. Unlike the book of the same name by Max Brooks, this movie doesn't really go into the geopolitical changes that occur as a result of the onslaught of the reanimated corpses. Unlike Steven Soderbergh's Contagion, it's not a scientific look at how official organizations would respond to such an outbreak. Unlike The Walking Dead, it's not about how people change or societies fall to their basest level as a result of a post-apocalyptic environment. It really is all about having Pitt run from here to there.

Being a zombie movie, Brad Pitt hits all the requisite beats. There's only two times where I was engaged with him as an actor. The first time is during a rooftop scene in Newark, New Jersey, where Gerry thinks he's infected and what he's willing to do as a consequence. The second is when Gerry is trapped inside a vault and has to make a difficult choice to escape. I like Brad Pitt in general. He's a great actor and he can effortlessly with his eyes draw anyone in.

Most of the action is too frenetic and crazy to be appreciated. The exception is the final sequence inside the World Health Organization or WHO facility, which is more steady and quiet, but it still has enough thrills and chills to be worth the price of theater admission. Too bad the ending is too predictable and filled with too many platitudes.