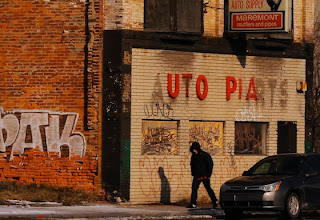 Heidi Ewing and Rachel Grady's documentary is about the plight and financial difficulty of the city of Detroit. In the city, Ewing and Grady take a picture of a store that has the words, "Auto Parts," written in red letters above the door, except the letters for the first "A" and the "arts" have faded and someone has spray-painted in red to form the word, "Utopia," above the door instead. Given the desolation, "utopia" is obviously ironic.

Ewing and Grady start with the reduction or sheer loss of manufacturing jobs. This includes the auto industry where positions have been either cut or outsourced. Because of which, there are echoes of Michael Moore's Roger & Me (1989). A lot of the issues and problems that Moore raised in that film 24 years ago are raised again here. The closing of manufacturing plants has a ripple effect that results in minor things like lower retail spending or lower arts funding, as well as major things like foreclosures, property values going down and tax revenues decreasing, meaning the city has no cash for bus services for example.

We see futile attempts of the mayor trying to address some blight problems. We see people scrounging for scrap metal from condemned places. There is also great people that Ewing and Grady follow like Tommy Stephens, the owner of Raven Lounge, a bar and restaurant. They capture great moments like a funny interaction between Switzerland tourists that is brilliant.

They also capture some great visuals like a half-demolished, high-rise building that sways in the wind, but this documentary is not all doom and gloom. Young people move into downtown Detroit cheaply and a black opera singer offers hope, as he sings in an abandoned building. I believe his name is Noah Stewart, and he has a beautiful voice.

Four Stars out of Five.
Not Rated but recommended for 14 and Up.
Running Time: 1 hr. and 26 mins.
Streaming for free until June 17 at video.pbs.org/video