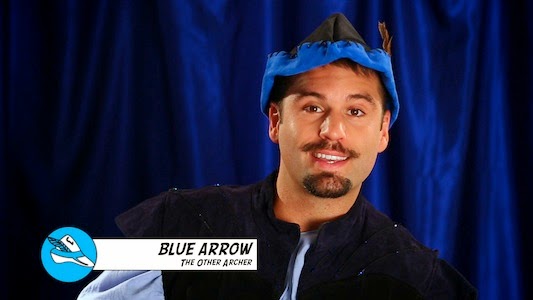 It's a mockumentary, reminiscent of Finishing the Game (2007). Except, instead of making fun of Bruce Lee and his style of films, it makes fun of comic book heroes. This comedy by Keith Hartman is also a live-action version of Drawn Together, the cartoon series that satirized various animated cartoons but also satirized MTV's The Real World, which Hartman does here as well. Hartman also has the breath of all the iterations of The Real Housewives series that he's stepping atop too.

A harsh, ambitious and insane TV producer named Alan Roberts, played by Stu Hammill, is casting for this MTV meets DC Comics show. At first, it seems as if the costumed heroes are just ones who a person might find on Hollywood Boulevard, but actually the costumed heroes are real super heroes or crime fighters. Yet, it's super heroes who are more on Kathy Griffin's level in terms of celebrity.

They're on the same level of super heroes as the ones in Kick-Ass (2010) or the ones in the Hulu series The Awesomes. Hartman doesn't have the budget of a studio film nor the leeway of being an animated project. Yet, he has an interesting trick that grants him the ability to make big jumps. He inserts interstices of comic book pages or stills with very alliterative narration that allows the depiction of action scenes or any exteriors outside his one, main location.

Hartman also maintains such a quick and snappy pace to the movie that never lets up. The fast or upbeat momentum is characterized by numerous, short scenes with increased edits and rapid transitions of literal, swooshing wipes. Hartman moves his movie with quite the alacrity, cramming so many jokes and gags. All of which are successful, mainly because he doesn't linger on them. It's almost like the Robin Williams or Arrested Development-style of comedy where one just bombards people with stuff not really giving them time to think about it but at the same time forcing them to do just that.

Thankfully, it's not just Hartman throwing fart or dick jokes at us. His script is smart. He attacks stereotypes like gender and sexuality, as well as hero tropes in such an insightful way. It's all aided by the performances of the actors who sell the utter ridiculousness with such aplomb. It's instantly one of the best comedies no matter how cheaply made. In fact, it utilizes and even calls out its own threadbare nature.

It's a true ensemble where no one is more important than the other, but Melissa Jobe stars as Sable, a single mom turned crime fighter who is the Batman equivalent. Yet, she has to handle a bratty teenager. Sable's situation is exacerbated by her obsession with her work, which causes Sable to ignore or miss quality moments with her lesbian daughter, Alison aka the Vixen, played by Ilona Kulinska.

Everyone else is hilarious, including Keila Hamilton as Malibu Action Girl, a Barbie come-to-life, superficial and all about fashion and concerned more with what outfit she wears when fighting bad guys. Matt Palazzolo plays Psychic Sam, a precog who does his crime-fighting by phone. Hunter Smit plays Big Shot and Grant Landry plays Blue Arrow. Both are competing versions of Green Arrow. Lars Slind plays Water Warrior, a vapid and self-absorbed Aquaman.

There's also a funny selection of sidekicks and villains who had me cracking up as well. One can and should discover them for oneself.

Five Stars out of Five.
Not Rated but contains language.
Running Time: 1 hr. and 23 mins.
Available now on DVD and VOD.