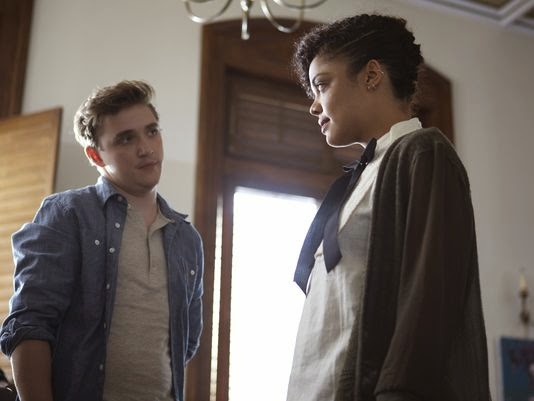 The film focuses on a race war on a college campus. As it plays out, it very much becomes a thematic sequel to John Singleton's Higher Learning but only geared for the Millennial generation, and the group of children reaching for secondary education in the wake of President Barack Obama and the so-called post-racial world.

Writer-director Justin Simien attempts to tear down that fallacy and posit that racism still exists. It merely takes more insidious and subtle forms, and on occasion not so insidious or subtle forms. Simien's inspiration for his narrative comes from actual, real-life college parties where white students dressed up in black-face or mimicked black culture in ways not perceived as celebratory but instead in ways that embraced base and gross stereotypes.

Tessa Thompson stars as Sam White, a biracial student at Winchester University who hosts a campus radio program entitled "Dear White People." Her show is simply herself speaking into a microphone and posting clips on YouTube. Her show is meant to be informative, pointing out those insidious and subtle forms of racism. At time, her quips can come off as a comedy act, oddly reminiscent of Jeff Foxworthy's "You might be a redneck, if..." but through Sam as "You might be a racist, if..."

Her attacks range from superficial like how many black friends does the white person have to the more deeply ingrained like a white person's reasoning for dating a black person. Her program, however, isn't just aimed at white people. Black people are also the target of some of her jabs. Those particular black people are personified here in Simien's film.

Tyler James Williams co-stars as Lionel Higgins, an undeclared major but aspiring writer who is openly gay but is somehow not openly black, despite walking around with a massively unkempt afro. He thinks possibly that because of his enjoyment of Mumford & Sons, the bluegrass-country band, and his favorite filmmaker being Robert Altman, black people won't get him. He also thinks his sexuality might be off-putting to everyone else.

Early in the film, it's pointed out how the campus is divided into groups. The groups are distinguished largely by interest and specific activity but also by race and ethnicity. The housing on campus, and not necessarily the dorms, but actual houses on campus are similarly divided. Oddly, this is something that Sam wants to maintain, whereas powers-that-be want to break up and randomize the housing situation.

It's funny how this year marks the 60th anniversary of Brown v. Board of Education in 1954, a landmark Supreme Court case that shot down the notion of "separate but equal." Yet, Sam wants the campus house that is predominantly African-American to stay that way. She doesn't want white people there, not necessarily because she hates white people. She herself is biracial. She's even dating an adorable, teaching assistant in her film studies class who is white, Gabe, played by Justin Dobies.

She feels that black culture is under attack. Either it's being co-opted or it's being watered-down or lost in a shuffle. She and her friends have to defend it or champion it or try to hold onto it in a strong way. Because Sam is in film studies, a lot of the defending in a meta-commentary from Simien comes in the form of analyzing and critiquing black representation in the media. Things like Tyler Perry and The Real Housewives of Atlanta make for easy targets.

At the end of the day, Simien is trying to get at this question of black identity in the Obama era or what is it to be black in the 21st century, as well as what is racism in the Obama era. There's also an interesting tale here about fathers and sons, and certain generational expectations. Troy Fairbanks, played by Brandon P. Bell, and Dean Fairbanks, played by Dennis Haysbert, are the father and son most at odds. There's also Kurt Fletcher, played by Kyle Gallner, and University President Fletcher, played by Peter Syvertsen.

It could just seem like one big thesis statement from Simien, but I think he's legitimately asking questions. Sam doesn't always have the answers. She's put in her place a couple of times. She's not all-knowing. She's very much a college student trying to figure herself out too, stumbling along the way, but she is smart and strong. Ultimately, that's what makes her beautiful.

Not all white people here are bad either. We all still have a lot to learn. However, the movie is funny, and it's not as blunt or tragic as the ending to Higher Learning.

Five Stars out of Five.
Rated R for language, sexual content and drug use.
Running Time: 1 hr. and 46 mins.