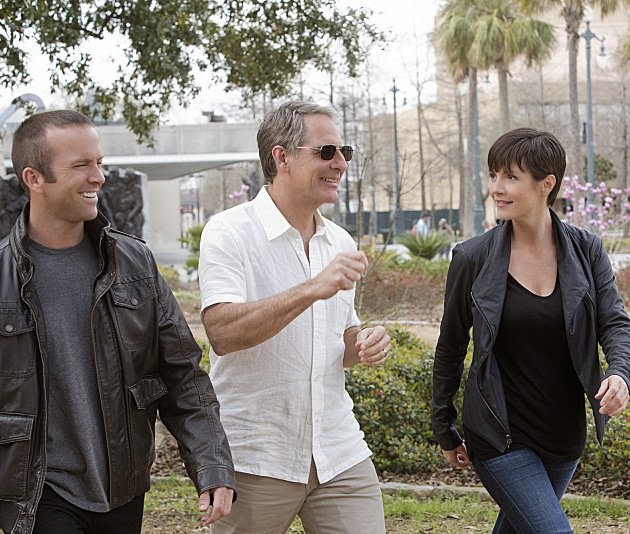 I'm somewhat mad at this show because it could potentially keep Scott Bakula from being more of a presence on HBO's Looking. Earlier this year in January, Bakula had a significant role in the show about a group of gay men in San Francisco. Not that long after, in March, Bakula appeared in a two-part episode of NCIS. This two-part episode, written by Gary Glasberg, was essentially the pilot for a spin-off.

NCIS, however, can bank more on the action and excitement of most cop shows, and it's worked. Since 2009, NCIS has been the most watched, scripted drama, becoming #1 in the 2012-2013 season. It's no wonder it gets a spin-off or two. This series is in fact the second spin-off. It follows NCIS: Los Angeles (2009).

It's always good to see Bakula do any thing because he's such a great actor. This role does allow him to run around, even at age 60, and shoot a gun with deadly precision. He also gets to banter with the younger cast and show them all how well Pride is at cooking Louisiana food. Fans of NCIS will enjoy seeing the regulars of that show frequently pop up, as a way of course helping this show get off the ground.

The police procedural is a bit boring and tired. Creatively, this show gets lost in a sea of others just like it. Episode 2, for example, involved a case of bio-engineering. This was the same week, in fact, the day after the other new CBS series Scorpion also did a bio-engineering, deadly disease story.

It's always interesting though when a series can teach you something. Episode 1 teaches that a tattoo will fade off a body, if it's applied after death. Why anyone would need to know that is beyond me, but now it's something that I know and I have NCIS to thank.