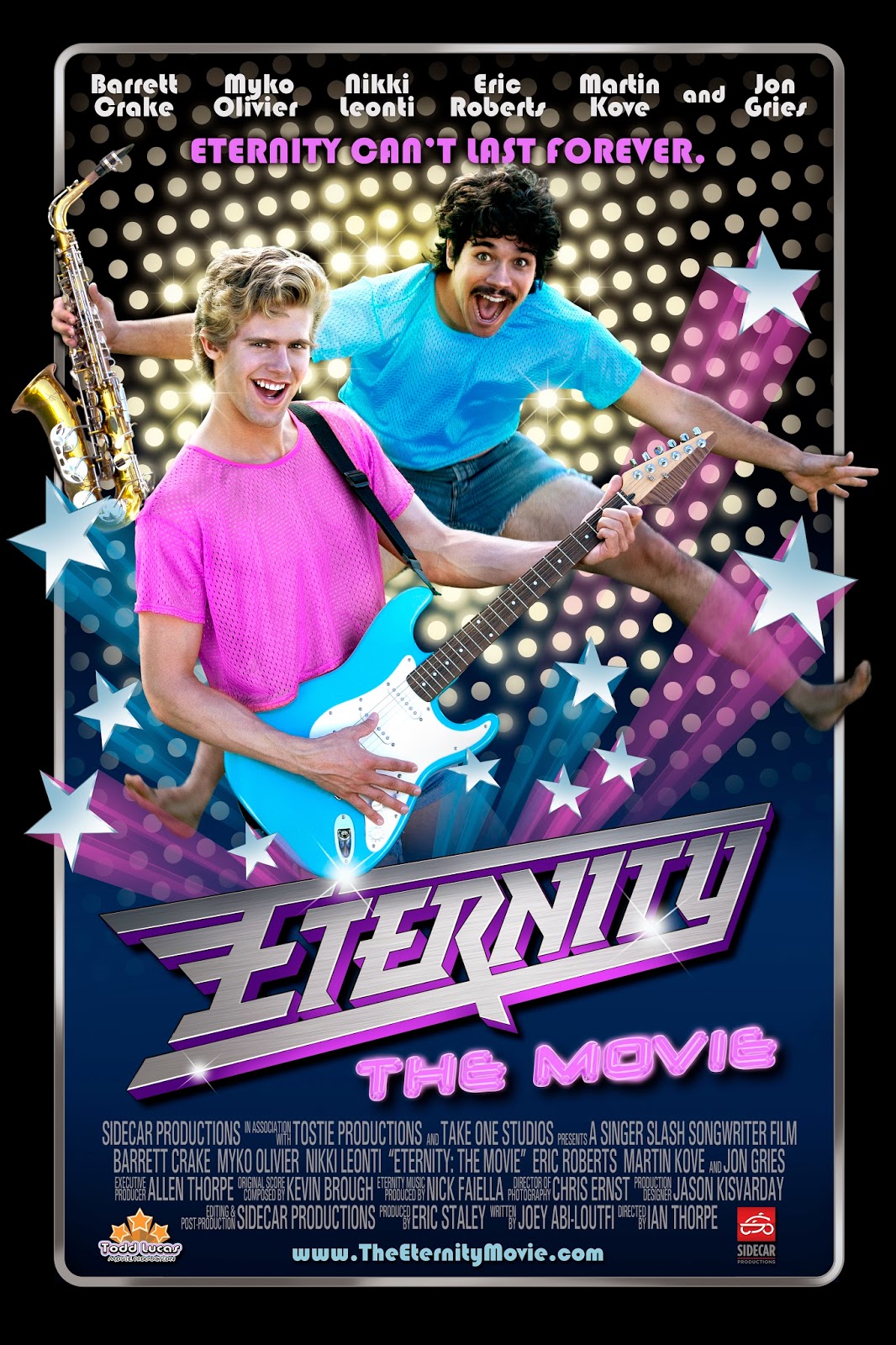 Eternity: The Movie opens in Times Square in New York on October 17th. It opens in Beverly Hills, California, and the Church and Wellesley section of Toronto on October 24th. It's the new comedy-musical about the formation and the fall of a 80's, R&B duo named Eternity. Written by Joey Abi-Loutfi, and directed by Ian Thorpe, it stars Barrett Crake as Todd Lucas, the lead singer and songwriter. He's the one on the poster in pink. It also stars Myko Olivier as BJ Fairchild, the saxophonist and backup vocals. He's the one on the poster in blue. Crake and Olivier chatted by phone the Monday prior to the movie's theatrical opening.

Barrett Crake was born in 1985 in the Dallas, Texas, area. Like so many young boys, he loved fantasy and science-fiction films like Star Wars, Back to the Future and Jurassic Park. Yet, he was also a fan of Disney movies. He even said that this past weekend was spent with his boyfriend in Disneyland where he watched the Aladdin show, and not just because his friend was starring as Iago.

Crake's love of these kinds of films went beyond the general. He said that he used to read books when he was little about the making of movies. He imagined that he might be a director one day. Growing up in suburban Texas, he wasn't exposed to the kind of creative people to foster that imagination or perhaps nurture that dream. It wasn't until Crake went to Austin to attend the University of Texas did his mind change. He started studying film and even had a semester in Los Angeles just prior to his graduating in 2008. It was then he decided to stay in L.A. and pursue that dream. This mirrors what his character does in the opening to Eternity: The Movie.

Myko Olivier was born in Palm Springs, which is about two hours east of downtown Los Angeles. He moved to New York City to attend NYU where he majored in drama but was always interested in film and television acting. He graduated in 2009. He moved back to L.A., not long after. He ping-ponged in a sense back to California.

Crake worked at The Price is Right for two years. He continued studying acting and singing. He auditioned for independent and short films. Olivier was able to get representation pretty quickly after returning to the west coast. He immediately started appearing in commercials, both local and national. His current campaign is for Toyota.

Both Crake and Olivier heard about the casting of Eternity: The Movie. Both were sent a partial script and both said they didn't realize it was meant to be a comedy at first. In fact, Crake thought it was stupid and Olivier thought it was really melodramatic. It was only after both did some digging that they realized the truth, that it was more in line with This is Spinal Tap or Napoleon Dynamite-style of humor.

Crake had recently done a short called Incest: The Musical, which in some ways prepared him for this current role. He auditioned by putting himself on tape, performing one of the key songs from the movie, "Make Love, Not Just Sex," which he found on the filmmaker's website. Crake later learned he was the only auditioning actor who did that, which invariably got him the role.

Olivier said he auditioned opposite Abi-Loutfi, the screenwriter. He said he jumped into the writer's face and "invaded his personal space," which impressed them. What also impressed was Olivier's resemblance to John Oates, the inspiration for the character BJ. It's almost appropriate that Olivier didn't record himself singing like Crake because Olivier admits his character BJ doesn't do much singing. Olivier can sing and he did do musical theater all growing up. In college, he even had the lead role in Nine.

The two actors got the 90-page script in April 2012 and started filming it in July of that year. The three months in between were rehearsals for the two. That time allowed them to learn their lines but also more importantly, it let them connect and bond, as well as become friends off-screen, helping them to be better friends on-screen. Crake said they spent time in an apartment going over key scenes, but Olivier said they also went out, almost method-acting style as their characters in costume, hitting up karoake bars and performing not always to great success.

As a result, Crake said when he was on set, he was very comfortable with his co-star. He said the atmosphere was "a big playground." It was really laid-back. Olivier added that their director Ian Thorpe was very open to ideas from them, and the whole movie was much "a collaborative process."

Crake said, as actors, they can be just as informed about their characters as the filmmakers. As many movies have allowed, Crake improvised, changing or adding lines here and there. He even got to explain how much his character Todd feared ninjas, a factoid probably unknown to even Abi-Loutfi.

Olivier didn't necessarily improvise new lines of dialogue or song lyrics. He instead was able to suggest or improv more wordless, visual gags. From a joke involving his male anatomy to a Rubik's Cube to a choking riff with a VHS copy of The Karate Kid, Olivier seems to love playing with props, although there's a silly split-screen joke that he said was his idea too.

When asked to talk about their characters, Crake said Todd Lucas is very much the little kid inside himself but turned up by a factor of 20. He's earnest, sincere and naive. Crake also shares his character's love of the fashion of that time. He specifically likes the 80's use of lots of color, piggybacking off the 60's and 70's, pushing the limits of crazy, fashion that was carefree and happy.

Olivier said his character BJ Fairchild is a guy making up for a lot. BJ is "extremely insecure," overcompensating by feigning machismo and sexual aggressiveness, just trying to fit in. He gravitates toward Todd because of Todd's genuineness and talent, as well as BJ's desire to be included and valued in the industry he loves, even though he knows he isn't and probably will never be the front man.

Of the dozen or so songs on the soundtrack, Crake said "Double Cross," a track that plays during the second, 4-way sex scene, is his favorite. The lyrics aren't really heard in the movie, but Crake thought it sounded like a Madonna song, Madonna being one of Crake's favorite music artists. He's also a fan of electropop and British and European acts like Lily Allen and Sam Smith. Crake thought "Double Cross" is the song most likely to be heard on the radio.

Olivier liked the track "Saxophone in the Sky." He joked that he liked the song because it was about him. His favorite though is the movie's most iconic song, "Make Love, Not Just Sex," the official video of which is on YouTube. Yet, Olivier thought the funniest track was "Alana," which is either ironic or just a blackly humorous song about a woman who drowns.

Olivier said that the movie succeeds in replicating 80's music and that, yes, the lyrics to "Alana" are campy, but, he said that looking back to real-life, 80's songs like from Madonna and her hit song "Like a Virgin" for example, the lyrics and whole idea seem ridiculous or campy. Even lyrics to present-day songs, if analyzed absent beats, can seem pretty silly. 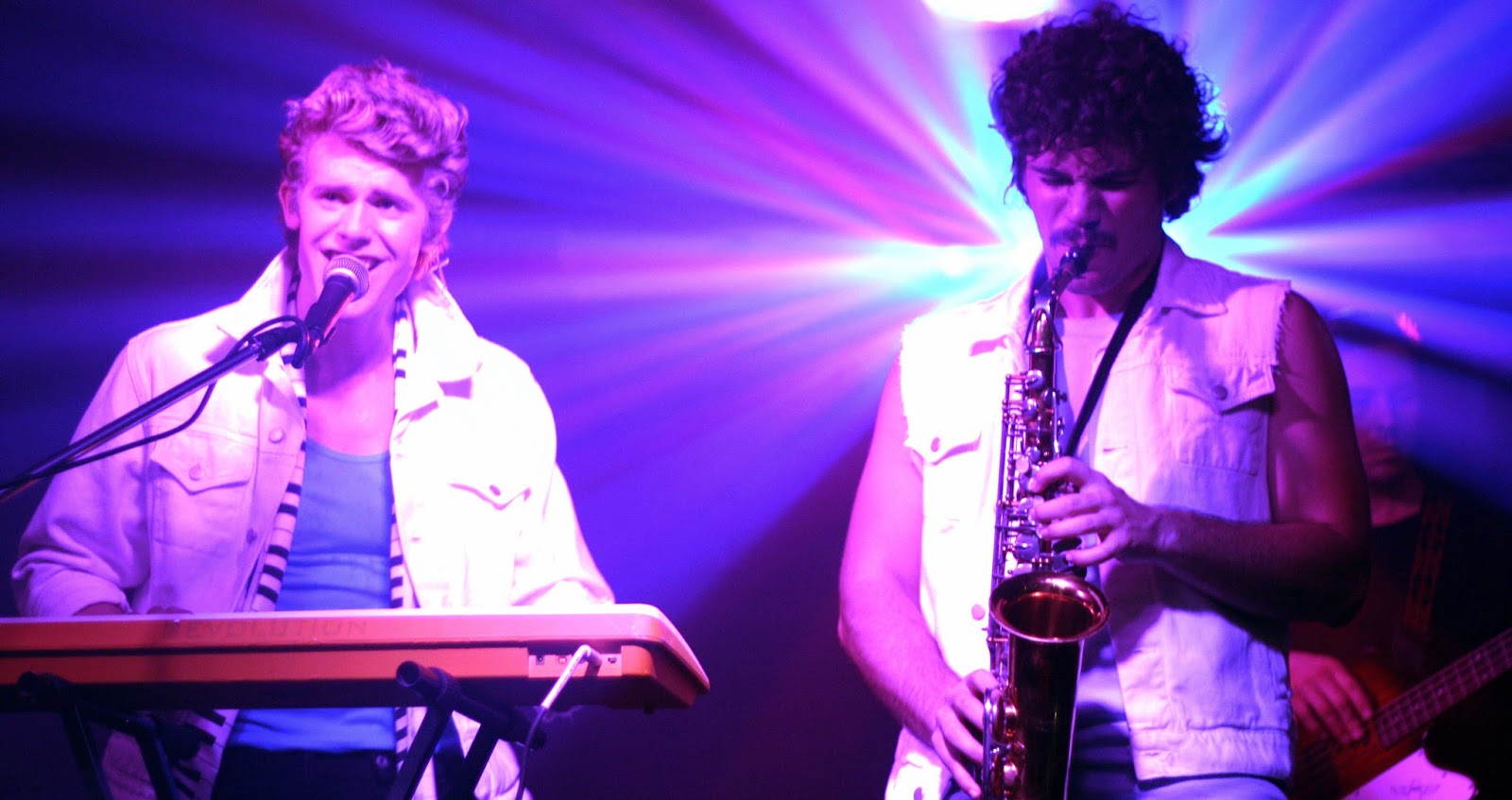 Silly or not, Crake said, aside from doing more movies and TV shows, he's working on music. He's even been performing the Eternity songs at venues in L.A., and he hopes to do that more and more. Olivier will continue to do television. Some might remember him earlier in the year during his appearances on ABC's Castle and NBC's Community. He says he has more gigs lined up, and while Olivier can sing and do music, he's not as much a musician at heart as Crake.

Olivier said instead he loves discovering musicians on YouTube. He was addicted to classic rock like Led Zeppelin and The Who, but he's had fun exploring bluesy, alternative stuff, comedic takes like Epic Rap Battles of History as well as new artists doing fantastic covers like Noah Guthrie who did renditions of "Man in the Mirror" and "Skyfall" that Olivier highly recommends.

Crake admitted he's an Apple Computer nerd. He's not on YouTube as much as he's on Mac Rumors, Pixar Times, Rotten Tomatoes and Nintendo Life.

Both Crake and Olivier love blockbusters. Both cited Guardians of the Galaxy as their favorite film of the year. This goes back to Crake's love of fantasy and sci-fi no less, but Olivier also said he's a fan of Tarsem Singh, the more artistic filmmaker behind The Cell (2000) and The Fall (2006). Both loved the TV series Breaking Bad, but Crake is not much of a TV watcher, just because there's too much.

Both will attend the upcoming screenings of Eternity: The Movie. Crake will be in New York for those initial showings. Olivier won't be, but he'll be present for the initial L.A. run. Crake will also be in attendance for the Toronto screenings.

Follow Barrett Crake and Myko Olivier on Twitter, @BarrettCrake and @ThisIsMyko.
You can also follow the film and its filmmakers, @EternityTweets.
For more information about the movie, including more cities and play-dates, go to: http://www.theeternitymovie.com/