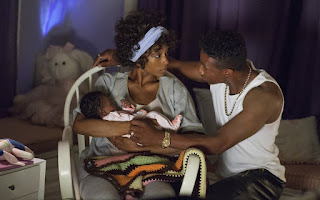 Oscar-nominee Angela Bassett worked with and befriended Whitney Houston, one of the greatest and best-selling, R&B singers who ever lived, during the film Waiting to Exhale (1995). There is perhaps no one more qualified to do a biopic on Houston. Sadly, this teleplay by Shem Bitterman is not about Houston per se. It's more about Bobby Brown, the former boy band member and her on-again-off-again husband. Yes, arguably, the movie is specifically about the relationship between the two of them, but the movie pivots, so that it's no longer balanced and it becomes more about his experience and his perception of her.

In fact, the first of five, full, musical performances is that of Bobby Brown, played by Arlen Escarpeta, doing "Every Little Step" at the Soul Train Awards in 1989. In actuality, the real-life Bobby Brown did the song "My Perogative" at that awards show. Escarpeta's outfit and even dance-moves match Brown's actual performance. The only difference is the choice of song. The reason for the difference is probably because "My Perogative" is more of a song about doing whatever he wants despite what people say, whereas "Every Little Step" is more of a romantic song.

Yet, we're meant to be impressed with the sexy and smooth performer as is Whitney Houston, played by Yaya DaCosta (Lee Daniels' The Butler and Mother of George), and we are. Escarpeta owns the role in that moment and immediately thereafter. You get why she would fall in love with him. It helps that Arlen Escarpeta is far better-looking than the real Bobby Brown at that time.

DaCosta is fine as the stand-in for Houston. She emotes on stage with conviction and does some mean lip-sync. Real-life, R&B singer Deborah Cox recreates the voice of Houston and does a pretty knockout job. What DaCosta does mainly is try to fill in the time in between the musical numbers. The intriguing bits include this clash that Whitney's mom, Cissy makes. Cissy is played by Suzzanne Douglas (Jason's Lyric and How Stella Got Her Groove Back), and Cissy calls Bobby a bad influence or ghetto trash essentially.

Yet, Bitterman's script or Bassett's direction doesn't really make us feel that bad boy or ghetto side of him. There's a little bit thrown in at the end, but when Cissy objects to Bobby as a boyfriend and potential husband, it makes no sense or it doesn't resonate. It's not clear where she's coming from. One clear example is that early Whitney offers Bobby some drugs and he turns her down. He's honest with her. He says he loves her. He wants to be serious and make a commitment but she pushes him away.

Yes, in real-life Brown was a bad boy who split from New Edition, the band he was in, and he had two babies by two different women and ran around with guys on the streets with guns, but again, Bitterman's script or Bassett's direction doesn't allow us to see or truly feel that. We're told that by Cissy, but the movie never truly realizes it. For the most part, Bobby is a sweet guy who is desperately in love who in the end makes a mistake but is hardly the threat Cissy says.

Perhaps, this is the point. In real-life, Brown has been demonized. People in fact blamed him for Houston's death, which was of an overdose. He was blamed for exposing her to drugs or the drug-using lifestyle. This movie would seem to suggest that he didn't expose her to anything that she didn't already have. If anything, this film is a rebuttal and seeks to redeem Bobby Brown, which is fine, but the question then becomes, if Bobby didn't give Whitney those drugs, where did she get them from? It's an obvious question that this film doesn't even think about approaching.

Reign Morton does a good imitation of Eddie Murphy in his one scene. I like Wesley Jonathan but he's perhaps miscast as Babyface, though Mark Rolston as Clive Davis seems spot on. The real hero, however, is Deborah Cox as the voice of Whitney Houston when performing her iconic songs. We hear her recreate "Greatest Love of All" as well as "I Will Always Love You" and she nails it, almost perfectly.

Bassett directs the musical numbers with just DaCosta on stage, which is fine because the voice is the true wonder. However, Bassett attempts something different with the performance of "I'm Every Woman." Bassett cuts back-and-forth of DaCosta in various outfits, giving the idea of the multiple times that Whitney had to do that song and have the same energy and vocals. This is also fine, but it seemed like a missed opportunity to cut away to Houston's real-life so we can see her being every woman, as the song says.