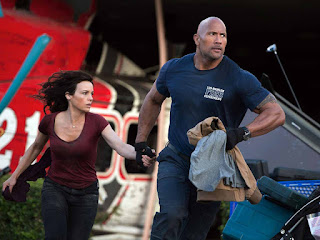 Most will compare this film to the Roland Emmerich films where there are massive, if not worldwide disasters. Aside from Independence Day, I haven't seen any of Emmerich's natural disaster movies, so I can't make those comparisons, but I'm aware that the comparison exists. My context for this one, therefore, is at a bit of a disadvantage. For me, the imagery and plot here was more reminiscent of Twister (1996) and even Superman (1978).

Dwayne Johnson, aka The Rock, stars as Ray Gaines, a chief with the Los Angeles Fire Department who also doubles as a helicopter pilot with the rescue squad. He's certainly never Clark Kent. He's always the big, muscled hero, though ironically he's not the one leaping tall buildings in a single bound. That honor goes to Ray's ex-wife Emma, played by Carla Gugino.

Once the massive earthquakes begin, Ray decides to save his family, which includes Emma and their college-age daughter Blake, played by Alexandra Daddario. Blake becomes trapped in San Francisco when the massive quakes travel northward from Los Angeles. For Emma, she's in a skyscraper in downtown L.A. when the quakes hit, so she has to run to the roof where Ray comes with his helicopter for her.

Emma isn't exactly leaping over tall buildings in a single bound. She's simply leaping from them in a single bound, as the buildings collapse beneath her, so maybe my comparison isn't appropriate in that regard. There is a destruction sequence at the Hoover Dam that does compare to that first Superman movie with Christopher Reeves. With all the building collapses in both L.A. and San Francisco, along with all the wanton deaths, there's also echoes of the first Superman movie with Henry Cavil, that of Man of Steel.

Paul Giamatti co-stars as Lawrence Hayes, a professor at CalTech or the California Institute of Technology. He's basically the seismologist who develops a system to predict the quakes. Archie Panjabi (The Good Wife) plays the reporter covering all of this and trying to get the word out. All of their scenes felt superfluous. Lawrence's presence certainly didn't have the same weight and importance as the scientists in Twister. His whole existence in this film could have been excised. Even though his role was limited, Will Yun Lee who plays Lawrence's assistant was someone whose existence in this movie could have been more, if only because I felt he could have had a better arc in this story.

Other than that, the movie exists as a thrill ride, a literal roller coaster, as we skip from air to land to sea. Johnson is a solid anchor to carry us through. Daddario is surprisingly a good co-anchor that works extremely well too. The whole film isn't in a perpetual state of motion as seemingly Mad Max: Fury Road is, but, unlike that film, I was invested in the characters here more. For example, I know the names of the characters here, not the case for Mad Max: Fury Road.

Five Stars out of Five.
Rated PG-13 for intense disaster action and mayhem throughout, and brief strong language.
Running Time: 1 hr. and 54 mins.