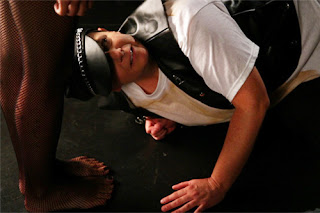 Michelle Ehlen completes her trilogy, which started with Butch Jamie in 2007 and continued with Heterosexual Jill in 2013. Ehlen plays Jamie, a lesbian who comes across as a bit more masculine. She's dating and is in love with Jill, played by Jen McPherson. Jill is the lesbian here who is a bit more feminine. In fact, she's a lot more feminine, just in terms of traditional or even stereotypical feminine features. The previous two movies established and dealt with the identities of these two women. Now, it's about how the two work together. As a mechanism for that, the two decide to explore the world of BDSM, or Bondage, Discipline, Sadism and Masochism.

I feel like Ehlen's films have been the lesbian equivalent of the Eating Out series, but the third Eating Out film did give full-frontal, male nudity. This perhaps says more about what women want as opposed to what men want. There is a brief shot of a woman's butt, but that's about the extent of it.

Lola and David are rivals, rivals for Jamie's time and affection. The rivalry seems to have calmed, but it's kicked up again when Lola who is bisexual decides to set up David with her own boyfriend Sebastian, played by Adrian Gonzalez (August and Your Family or Mine). Lola seems to have a problem with Sebastian who is also bisexual being with another guy, so she uses David because she thinks she can control David and thus Sebastian.

There's this idea that David is having trouble finding a boyfriend, so he needs this, but Takeda is such a good-looking guy and such a nice guy that it's difficult to buy that he would be this desperate. Perhaps, David's attempt and failure to land José, the hot, Latino guy in the last movie informs his actions here, but it's a suspension of disbelief that's still difficult. I don't buy that David would have trouble finding a boyfriend for any reason, unless he simply wasn't trying, nor do I buy that Sebastian is "the hottest guy in L.A." You could probably go to any beach or any gym in southern California and find just as hot, if not hotter guys than Sebastian.

Yet, the heart of the film is Jamie and Jill's relationship. Jamie and Jill both have to reconcile their insecurities about what the other wants or even what they want. There's a very interesting issue that Jamie has where she is scared of being boring but she also is scared of being the bottom, or the submissive. Jill tries to make the point that one's role in BDSM, or in the bedroom, doesn't necessarily define who you are outside the bedroom, or some cases, dungeon. It makes an interesting point of how we all assume roles, depending on where we are and what we're doing.

Three Stars out of Five.
Not Rated but for mature audiences.
Running Time: 1 hr. and 18 mins.

The film has its world premiere at the Frameline Film Festival, Frameline39, on Sunday, June 21. For show times and tickets, go to Frameline's web site. For more information and future screenings, go to the film's Facebook page or follow on Twitter @SMSallyMovie.