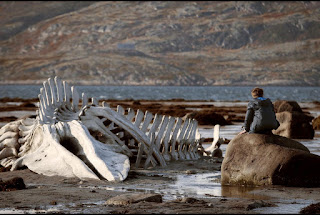 Russian filmmaker Andrey Zvyagintsev got the Oscar nomination for Best Foreign Language Film. It didn't win at the Academy Awards, but it did win at the Golden Globes. It was a nominee for the Palme d'Or and it did win for Best Screenplay at the 2014 Cannes Film Festival. It won a NBR Award, as well as six White Elephant Awards, including Best Film, which is one of the top prizes a movie can get in Russia.

Aleksey Serebryakov stars as Kolya Sergeyev, a family man with a wife and teenage son in rural Russia. He owns a good chunk of land out there. Yet, the government wants to seize that land and use it to build a communications center. Kolya obviously doesn't want to lose his land, so he goes to court and appeals the government's decision to take his property under what in the United States would be called eminent domain.

Vladimir Vdovichenkov co-stars as Dmitri Seleznyov, a friend and lawyer from Moscow who comes by train to Kolya's town to help Kolya with his court case. The court scenes are depicted as cold and as a completely unsympathetic machine that exists only to quickly crush men like Kolya. Zvyagintsev is either horrified, aghast or totally in contempt of the Russian legal system, or perhaps all three. Unlike Asghar Farhadi in Iran, he doesn't see the Russian court as a place where average or simple men have a chance.

Roman Madyanov also stars as Vadim Shelevyat, the mayor of the town where Kolya lives. He's the overweight, entitled bully who is the one leading the charge to take Kolya's land. He becomes increasingly antagonistic the more that Kolya fights back. It gets to the point that Dmitri thinks the only way to stop him is through blackmail. Dmitri has learned about shady, if not outright illegal things that Vadim has done. Dmitri plans to use that to force Vadim to do what he wants.

What follows only exists to break down Kolya. The movie continually crushes him, dismissing or disposing of him coldly. Mainly, it's due to the corruption of the government or the corruption within the government that has figures like Vadim who can do whatever they want with impunity. It's not just to Kolya. Those corrupt forces can also destroy his family or anyone who cares about him, or they can turn all against him.

This aspect of the film is great and I enjoyed it as a kind of satire, or an incredibly dark comedy. Its jabs at religion are pretty great too. It won't make you laugh out loud, but it is pretty hilarious. It's played so matter-of-fact that it looks as if it's a straight-forward drama, but inherent in that lies the humor.

I don't blame the pacing of this film, which might feel boring or numbing, but that is a feeling that's almost crucial to all of this working. If I would take anything out, it would be the adultery aspects from Kolya's wife, Lilya. I think I get the point of it. It's for misdirection and obfuscation, but I think Zvyagintsev's goal could have been scored without it. Yet still, this is a fantastic and highly, self-assured film.

Five Stars out of Five.
Rated R for language and some sexuality/graphic nudity.
Running Time: 2 hrs. and 21 mins.