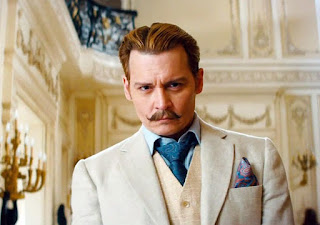 Apparently, Johnny Depp liked the novels by Kyril Bonfiglioli and decided a movie should be made of them, so here we are. Depp stars as Lord Charlie Mortdecai, an Englishman who is an art connoisseur and art dealer. He lives in a very lush estate in the countryside with his wife Johanna, played by Gwyneth Paltrow, and his man-servant Jock, played by Paul Bettany.

The plot revolves around a murder and a subsequent art theft. The suspect is a highly wanted man. Ewan McGregor plays Inspector Martland, an agent with MI-5 who decides to call upon Charlie's help. However, while Charlie and Jock are sent globe-trotting to chase down leads and put together clues, Martland is able to spend time with Johanna whom he not-so-secretly loves.

Even though I wasn't a fan, The Grand Budapest Hotel had a better plot involving a painting. Wes Anderson was a better writer for that movie than Eric Aronson is of this one. Anderson for example comes up with funnier lines of dialogue. The dialogue here is rather clunky. Director David Koepp, however, is better at maintaining tone overall. My problem with Anderson's film is the inappropriate tone at times. This film's tone stays on an even keel.

Each major character has a shtick. Charlie is a well-dressed, manicured, prim-and-proper guy who is a bit snooty and a bit highfalutin. He's somewhat bumbling, akin to Inspector Clouseau. Jock is the bad-ass butler. He's a sidekick who is the true action hero. Any trouble that Charlie has makes Charlie the damsel-in-distress and Jock has to save the day. Yet, Jock doesn't speak unless spoken-to. He simply follows behind Charlie. He is a worst womanizer than James Bond but way more successful. Johanna is merely turned off by Charlie's mustache and nags him to pay the bills.

Honestly, the only reason I watched this movie is because I learned that Guy Burnet was going to be featured. Burnet plays Maurice, an agent who is partnered with Martland at MI-5.

Burnet rose to fame in the United Kingdom when he co-starred on the hit series Hollyoaks playing the controversial character Craig Dean, which made him a bit of sex symbol. He gave a great performance, so I was curious to see what he would do next. He's easy on the eyes and it seems the filmmakers gave him a shtick too. Over the course of the movie, he goes from a smooth babyface to having his own mustache. This gag seemed to have gotten lost though.

Two Stars out of Five.
Rated R for some language and sexual material.
Running Time: 1 hr. and 46 mins.