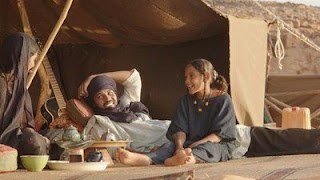 It was just reported that Abderrahmane Sissako was invited to join the Oscar Academy. Sissako is the writer-director who was just nominated for the Academy Award of Best Foreign Language Film for making this film about the occupation of the African country of Mali by the Muslim fundamentalist and terrorist group known as ISIL. Sissako is from the neighboring country of Mauritania, which submitted this film. It premiered at the 2014 Cannes Film Festival where it was a nominee for the Palme d'Or in addition to winning the Prize of the Ecumenical Jury and the François Chalais Prize. More spectacularly, it went on to win seven César Awards, including Best Original Screenplay, Best Cinematography, Best Director and Best Film.

There's a scene about half-way through the film or so where we see a woman receive 40 lashes, mainly to her back for committing the crime of singing and performing music. It was then that my mind wandered to the Oscar-winning film 12 Years a Slave and the scene therein of a woman getting brutally whipped on her back for committing the crime of getting soap to clean herself from working all day in the fields. It was then that I realized that life in Timbuktu under ISIL rule is perhaps akin to slavery, perhaps not a physical slavery but a slavery of the psychological or sociological kind.

In 12 Years a Slave, we see a woman get raped or have a slave-owner force himself on her. Here, there's a scene where a man named Abu Jaafar forces a young woman to marry him, practically against her and her mother's will, and ISIL leaders condone it, despite an appeal from a local religious leader. A shot later shows the young woman named Safia, crying in her bed. It's assumed that the man forced himself upon her, regardless of their marital status.

ISIL members walk around with guns and rifles. The opening scenes are ISIL members doing target practice, shooting at animals and random objects like little human figurines. Obviously, they use the threat of gun violence as a way of intimidating people into following their extreme form of Sharia Law. This film is largely about how people in Timbuktu cope with life under this threat.

Some have chosen to flee the country. This is something that a woman named Satima has observed. Satima lives just outside Timbuktu on what could be considered a cattle farm with her husband Kidane and their 12-year-old daughter Toya. They're very impoverished. Their house is basically one large tent atop a sand dune. Satima used to have plenty of friends, but they all left once ISIL arrived. Satima seems ready to flee herself but her husband insists they stay.

He's not alone. Satima and her small family are relatively safe, despite some ISIL members paying them visits regularly, but it's people in town that get the most grief. Toya remarks that her father isn't a warrior but a musician who likes to sing and play his guitar. He can do so on the outskirts of town, but people in town have nearby ISIL members who can easily hear them and arrest them, if they dare play music or sing. Yes, there are ridiculous rules like women have to wear socks and gloves at all times, as well as football or soccer being prohibited.

There are moments when people resist these ridiculous rules, and Sissako's film is at its best when it's showing us these moments. It's also at its most heart-rending when it's showing us the consequences of people's resistance to ISIL. Yet, those are just moments in the grand scheme. It's not the stuff of a strong story or narrative. It's especially not the stuff of strong character development.

Sissako never spends more than a few moments with these various characters who resist or have to live in Timbuktu. We don't really get to know any of them, so besides general empathy for their plight, it's difficult to care about any one in this film. The only exception is with Satima, Kidane and Toya. Yet, Sissako doesn't make their clash with ISIL based on anything as irrational as some of the other things like the ban of football and music.

Kidane kills a person. It might have been accidental, but still something like that can't be ignored. It doesn't make his situation any worse simply because ISIL are the ones doling out the so-called justice or legal consequences. It's a conflict or an issue that is somewhat removed from everything else.

The killing by Kidane does happen in what looks like one long, continuous take. It's somewhat impressive in how Sissako directs it, but Alain Guiraudie pulls off a similar and better shot of someone being surprisingly killed in Stranger By the Lake. So, I wasn't that impressed.

Three Stars out of Five.
Rated PG-13 for some violence and thematic elements.
Running Time: 1 hr. and 35 mins.