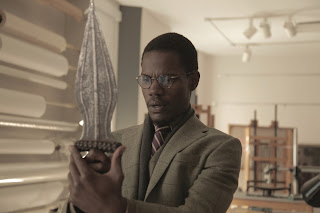 Spike Lee did a remake of Oldboy, the much-celebrated, Korean revenge film. Now, Lee has remade Ganja & Hess, the black, horror film from 1973 about an African-American who becomes a vampire and the woman he also turns into a blood-sucking monster. Lee's direction is of course remarkable at times, bold and beautiful in only ways Lee can do. The writing of Lee and Bill Gunn, the original filmmaker, is where things fall apart, and I'm not sure if any of the characters make any sense, and a lot of the ideas of modern-day and even civilized or bourgeois vampires were usurped by Jim Jarmusch's Only Lovers Left Alive. Even Jarmusch's commentary on Detroit, the plight and urban decay or ideas of poverty were better served than Lee does here.

Much as he did in Do the Right Thing, Lee opens this film with a dance number of a single performer moving to the backdrop of places in Brooklyn as we read the opening credits. Instead of Rosie Perez, the dancer de jour is Lil Buck, a Jookin dancer popularized by Spike Jonze. He's doing what looks like a combination of hip hop and ballet dancing. As such, the style isn't as hard or as aggressive as what Perez was doing. It's more gentle and graceful. Here, the characters aren't trying to fight the power. They want to be the power.

Next, Lee plunges us into a black church, a place he felt comfortable in his previous film Red Hook Summer. He was more critical of the church in that movie. Here, he's more celebratory. He seems to carry the same metaphor as in Ganja & Hess, which quotes the Bible's John 6:54 when Jesus says, "He who eats My flesh and drinks My blood has eternal life, and I will raise him up... For My flesh is true food, and My blood is true drink." I'm not a religious person, so I don't understand the metaphor but what else could be gleaned than followers of Christ are all vampires, or else more blasphemously that Christ himself was a vampire?

Stephen Tyrone Williams stars as Hess, a man with a doctorate who is perhaps a college professor or some kind of researcher, maybe an archeologist. He's taken to a museum in Brooklyn where he's shown a historical artifact from an old culture. The artifact is a huge blade. For some reason, Hess is allowed to bring this blade home instead of keeping it at the museum. Presumably, he bought it because Hess seems to be very wealthy collector of artifacts and culture.

Zaraah Abrahams co-stars as Ganja. She's the wife of a man who worked with Hess. She comes to Hess after her husband disappears. She had already fallen out of love with her husband and when she learns what happened to him, she doesn't care. She falls for Hess and presumably agrees to become a vampire like Hess.

This is where the film goes off the rails because the realization that killing people is the way to satiate their thirst for blood seems to have no other intelligence put behind it. It seems as if the victims chosen are victims chosen simply to show how sadistic and cruel Hess and Ganja can be. Oddly, anyone killed comes back to life with the exception of Lafayette Hightower.

Elvis Nolasco is an actor who Lee has employed before in Clockers (1995) and Oldboy (2013). Nolasco recently gave his best performance in the TV series American Crime. Here, he plays Lafayette Hightower, a neurotic man who spirals into depression. His suicidal tendencies make sense, but his murder attempt on Hess is quizzical. It's never explained why. Nolasco is such an amazing actor that it would have been nice to see more of him in terms of his relationship with Ganja, though his nude scene was beautifully shot.

The production design in general is beautiful here. A large chunk of the film is set on Martha's Vineyard in a large, opulent house. Both Hess and Ganja dress elegantly. Hess in particular has such a great style. His clothes and even his car look like he's a transplant from the Harlem Renaissance. There's even African art everywhere.

The soundtrack is current rap music. However, there is a great R&B song that is performed almost live within the film. In a church scene, Raphael Saadiq and Valerie Simpson do the song "You Got to Learn." It's the best original song to be placed in a Spike Lee film since Michael Jackson's "On the Line" from the film Get on the Bus (1996).

Unfortunately, Lee wastes the actor Rami Malek (Night at the Museum and Short Term 12) who plays Seneschal Higginbottom, the butler who does whatever Hess says. There could have been more of a rivalry between him and Ganja, but he's too easily dismissed.

I really do appreciate though his use of Stephen Tyrone Williams. I first saw Williams in an independent, gay film called Children of God. He was extremely charming and sexy in that film. He even got to be a little funny. Lee doesn't utilize Williams' comedic chops here, but Williams has such magnetic, screen presence that you want to watch him anyway.

Three Stars out of Five.
Not Rated but for mature audiences.
Running Time: 2 hrs. and 3 mins.