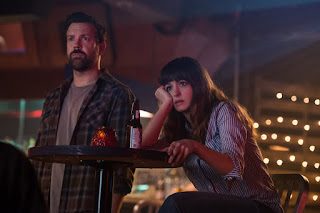 Anne Hathaway stars as Gloria, a woman with a drinking problem, which causes her to blackout and not know what she's doing. Often, while drunk, she does stupid things. She's a writer for online magazines but is currently out of work. Her boyfriend breaks up with her, which forces her to leave his Manhattan apartment and stay at her parents' cottage in some rural place. While there, she gets a job from a childhood friend who owns a bar. After that, she sees on the news that a monster has been appearing in Seoul, South Korea. She soon realizes that she's that monster. Like James Cameron's Avatar, she can control this tall monster only at a certain time of day and only in a specific place. She doesn't realize it soon enough to stop tons of damage and death though.

Jason Sudeikis (Horrible Bosses and We're the Millers) co-stars as Oscar, the friend who owns the bar. He clearly has unrequited feelings for her, but he doesn't come out and say them. He gets jealous of other men she's into and he becomes very possessive of her. He also realizes that like her he has an avatar that can appear in Seoul at a certain time and certain place. When his jealousy gets out of control, he threatens to use his avatar to hurt people if Gloria doesn't do what he wants.

All of this is interesting and compelling, but writer-director Nacho Vigalondo who was nominated for an Oscar twelve years ago resolves this whole thing in a very problematic way. First, it's got to be purposeful that this film doesn't pass the Bechdel test. It's got to be more purposeful than Hathaway's ego that she's the only woman in this narrative. I don't know what that purpose is. Perhaps, the purpose is to underline this specific woman's relationship with men and men only, and the issues inherent.

Tim Blake Nelson (O Brother, Where Art Thou and Lincoln) plays Garth, a friend of Oscar who practically ends his friendship with Oscar prior to his threats to Gloria. His character is taken off the board quickly. However, Austin Stowell (Whiplash and Bridge of Spies) plays Joel, another friend who witnesses Oscar physically assault Gloria and does nothing about it. He barely says a word. It's almost as if Joel is a bullied younger brother who can't stand up to Oscar but for him to witness what he does and do nothing is beyond ridiculous. If that's just the failing of his character, his inability to stand up to people, then it would have been better to have that be addressed. Instead, it's brushed over.

The ending, however, is more unforgivable. When Oscar's threats get more serious, it's ridiculous that Gloria wouldn't simply call the police or authorities. Oscar threatens to hurt or kill people using his avatar in Seoul, if she doesn't do what he says and basically submit to him. She was able to prove the link between herself and the avatar, so she could do the same with him and his avatar. She could then call the police with that proof and have him arrested for terrorism at least and at most mass murder.

At the end though, it's easy to make Oscar the bad guy, but Gloria is responsible for a lot of death and destruction. Yet, she never truly atones for the lives she killed. Yes, she feels guilt about it, but she suffers no real consequence for it. Vigalondo's solution is to kill Oscar and it's a shame that the solution to death is death.

It's also a shame that Vigalondo never pins down an exact number of how many people died in Seoul. In one scene, Gloria asks for a number but an exact number is never definitively stated. In this day and age, those details like numbers and names would be reported in the news. Yet, Vigalondo never does, which shows how much he cares about those dead Koreans.