VOD Review - Message from the King 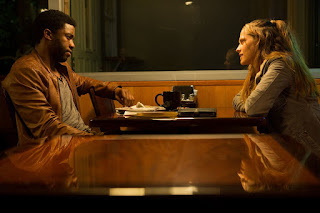 Chadwick Boseman is a 40-year-old black actor who has been in the business for 15 years now. It wasn't until five years ago that people started to know his name when he got his second, leading role in a feature film as real-life, baseball star, Jackie Robinson in Brian Helgeland's 42 (2013). He went on to become the real-life, R&B star, James Brown in Tate Taylor's Get On Up (2014). Many critics praised his performance, and in October, he will again portray a real-life, historical, African-American figure. This time, he'll be taking on the role of the first, African-American on the U.S. Supreme Court, Thurgood Marshall in Reginald Hudlin's Marshall, and it may yet garner Boseman an Oscar nomination. However, given the title of this film, one shouldn't get any ideas of Boseman as Martin Luther King, Jr., or the like.

Despite all these well-known, historical figures, most people will probably know Boseman from his role as the Marvel Comics hero, Black Panther, which will get his own solo film next year, but he first appeared as that character in last year's Captain America: Civil War. Ironically, this film, which Boseman executive produced, his first feature as E.P., will probably be his least in terms of visibility, but this character and his super-hero persona do share a few thematic things in common. 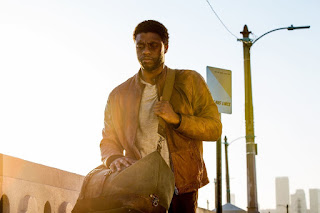 Essentially, this is a vigilante film. A man goes around with a gun and takes revenge or solves crime by executing criminals himself on the streets. Probably, the prime example of a vigilante film is Death Wish (1974), which has been remade this year with Bruce Willis. There have of course been several iterations like The Boondock Saints (1999), The Brave One (2007), Harry Brown (2009) and John Wick (2014). In comic books, many super heroes are premised on this vigilante mentality. The best of which is Batman.

Batman in general has been distinguished by the fact that he doesn't use guns and he doesn't kill criminals. He captures them and hands them over to the police and the courts. Later versions of Batman, including Zack Snyder's depiction in Batman V Superman: Dawn of Justice, turned Batman into a killer of criminals. I didn't appreciate this killer Batman version. It feeds more directly into the myth of redemptive violence. 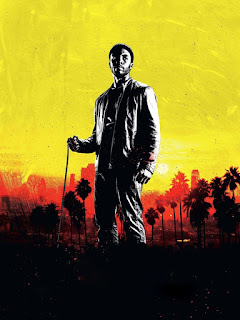 At first, Boseman's Jacob King doesn't seem that bad. Yes, he will beat drug dealers into submission with a bicycle chain. He beats one goon so horribly that the goon requires serious dental work. Jacob King doesn't sneak or creep up on them like Batman. He strolls casually and rather nonchalantly into their faces. Without flinching or hesitating, he assaults them. He's unafraid and confident in that regard.

The film doesn't depict Jacob King as invincible or tough in the ways of the characters in the most recent Fast Five film and sequels. Jacob can be injured and does require time to heal. The seedy and lurid nature of Los Angeles bubble up, as Welz wants us to bath in it as a way of justifing Jacob's violence in the third act. Butcher and Cornwell's script does indicate a corruption in the LAPD as to suggest no other option for Jacob but become like Denzel Washington in The Equalizer (2014). This would be fine, if the end conveyed an appropriate sentiment, reflecting and lamenting on the violence in a way that didn't celebrate or show a need for it. Unfortunately, I'm not sure what the ending here is supposed to signify.