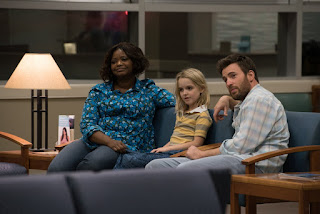 Marc Webb is a music video director, best known for making the romantic comedy (500) Days of Summer (2009). He's also a producer on the TV series Crazy Ex-Girlfriend, another romantic comedy and musical for which he seems to fit. It's only when Webb tries to do anything that's not a musical or a rom-com that things start to fall apart. This is perhaps less to do with him than it does his writers. He perhaps lucked out with (500) Days of Summer in that he didn't write that script, or maybe he's just not the best with something that's strictly dramatic. Even his rom-coms, which have ridiculous and cartoonish things, still feel more genuine and less contrived than this film. This film is weighed down by predictability and an overall contrived sense about it.

Chris Evans (Captain America: The First Avenger) stars as Frank Adler, a former philosophy professor from Boston who now works as a boat mechanic in Tampa. His sister was Diane Adler, a math genius who committed suicide shortly after giving birth to her daughter, Mary. Frank takes Mary from Boston to Tampa because Mary's father is a deadbeat and Frank blames his mother Evelyn, played by Lindsay Duncan (Birdman and About Time), for Mary's death. Frank doesn't think his mother would raise her right. Seven years later when Mary shows signs of being a math genius, Evelyn arrives and sues Frank for custody. The entire film then becomes about the custody battle for Mary.

In many ways, this film is like Good Will Hunting (1997), except instead of Matt Damon, the math genius is a 7-year-old girl named Mary, played by McKenna Grace (Designated Survivor and The Young and the Restless). Instead of Robin Williams, we have Oscar-winner Octavia Spencer who plays Roberta, the next door neighbor whom we learn nothing about. She's reduced to the stereotype of her character in The Help (2011), a black woman who exists only to tend to white children. At least in that film Spencer's character was given some depth, some character development and an arc of sorts. Here, Spencer's character gets nothing, and she's given nowhere near the amount of good material that Robin Williams got in his Oscar-winning role. 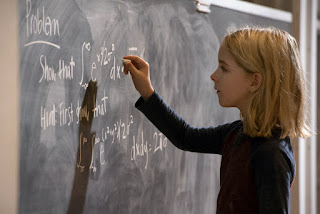 Instead of being a person's struggle with the kind of genius that Mary and her mother possess, this movie bogs itself down with a very predictable and highly contrived, custody battle. Writer Tom Flynn really strains credulity without much insight into certain characters and situations. It just doesn't make any sense why this movie had to be a custody battle. The movie draws a line about what is best for this little girl who is a math genius. The answer is obvious, but Flynn's script makes the two sides obstinate for too long and to an unbelievable degree.

Frank thinks Mary, the math genius should go to a regular school and sit in a class learning first or second-grade math when it's clear she knows advanced calculus. She's bored and frustrated and lashing out. Evelyn thinks Mary should spend all day and night studying physics and super complex math problems and nothing else. Obviously, there's a middle ground here that is clear from the get-go but the movie spins its wheels until that obvious middle ground is reached.

The movie chooses to waste time getting to that middle ground with this custody battle. The movie has to go through so many unnecessary layers to set it up. Mary's mom is dead. Her dad is a deadbeat. Frank and Evelyn are both obstinate for contrived reasons. All of that feels unnecessary to get to this movie's fundamental questions about parenting. Why Mary's mom can't be alive or why Frank simply can't be her father seems absurd. It removes the movie from being about the girl as it's about Frank who is arguably the least interesting character in the narrative.

The other thing that is eye-rolling about this movie is Frank's relationship with Mary's teacher, Bonnie Stevenson, played by Jenny Slate (Obvious Child and Saturday Night Live). Frank and Bonnie have sex and it's ridiculous. First of all, it's highly unprofessional on Bonnie's part, and it leads nowhere and has no point. It would have been more interesting if Frank and Roberta hooked up, mainly because it could have fleshed out Roberta's character, which was paper thin. Plus, it would have given Octavia Spencer a chance to be sexual, which women like her don't often get the opportunity to be.