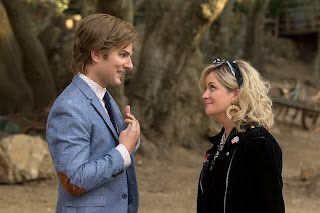 The film Wet Hot American Summer (2001) was a cult classic that was adapted into a prequel series with all the original cast and some new characters added back in 2015. It reintroduced the wacky concept that was the original film nearly 15 years later and set the stage for this current, sequel series. The prequel series though never quite fulfilled the promise made at the end of the 2001 film. This current, sequel series does fulfill that promise. It doesn't top the power of the original film, but it continues the ridiculous and silly humor that we've come to expect. It's essentially a live-action version of South Park and, as that, it works. It's funny in that regard. What's unwieldy is that it's juggling about 15 characters but does a fairly decent job keeping them all in the air. In Episode 6 for example, there's a sequence where the show cuts back-and-forth between four story lines, four scenes featuring 9 characters, and somehow maintains a nice balance.

The whole thing takes place at Camp Firewood, a summer camp for teenagers built in the woods, next to a lake in Waterville, Maine. The 2001 film focused on the 16-year-old, camp counselors, and when it ended, eight of them promised to meet again in 10 years at 9:30 AM. Two of the counselors were off screen when the promise was made, and the footage from that film is integrated here. Like Forrest Gump (1994) though, two new characters are inserted or superimposed onto the old footage. The series then starts with the show catching us up on all twelve of these people who seem to mainly live on the east coast as in New York City. They're all 26 but of course they're played by actors in their 40's.

Michael Showalter stars as Coop, a writer who is trying to finish his memoir. Marguerite Moreau plays Katie, an editor at a fashion magazine. Coop has feelings for Katie, which he hopes to reignite, but he has an Asian fiancée whom he never mentions.

Amy Poehler co-stars as Susie, a Hollywood producer who is having sex with the star of her movie. Adam Scott plays Ben, an architect who used to be in a relationship with Susie before he came out as gay. Scott replaces Bradley Cooper who had the role in the original film and the prequel series. Incidentally, Poehler and Scott played lovers on the NBC series Parks and Recreation. Ben, however, married McKinley, played by Michael Ian Black. McKinley is a new father who becomes hyper-paranoid of his new nanny.

Ken Marino plays Victor, the tall, well-built, permed hair virgin who pretends to be a stud with many women under his belt. Joe Lo Truglio plays Neil, a fellow bartender and best friend to Victor who recently broke-up with his girlfriend who dumped him for someone more cultured. 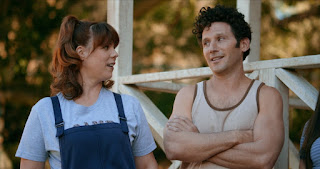 Mark Feuerstein plays Mark and Sarah Burns plays Claire. These are the two new characters inserted into the old footage. Their addition to the cast seems extraneous. It is purposeful, but that purpose does distract from time that could have been devoted to other characters whom we've known since 2001.

Janeane Garofalo who plays Beth, the camp director who was such a big presence in the film and the prequel series gets really short-changed here. Paul Rudd who plays Andy gets a good amount of stuff to do as the aforementioned king of camp and his rivalry with camper Jeremy Deegenstein, played by Skyler Gisondo. Yet, Andy's rivalry does underline the fact that this series doesn't spend as much time as in the prequel series with the campers.

There were a lot of great, guest stars from the prequel series who are brought back and even impossibly so. Chris Pine who plays Eric and Jason Schwartzman who plays Greg were killed off in the prequel series. Both are funny, and explaining their comeback is a great gag, but it simply takes away from the guest stars who could have gotten more time to shine. 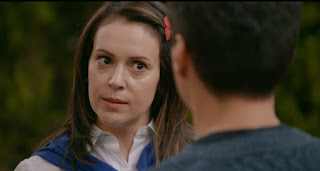 Josh Charles who plays Blake gets a fair amount of screen time. Yet, Kristen Wiig who plays Blake's love interest is criminally underused. Alyssa Milano (pictured here) is probably the best guest star as the nanny at odds with McKinley. We do get a nice dose of Jai Courtney as the hot, Hollywood beefcake, Garth MacArthur, but a missed opportunity is had with him not going shirtless, or even showing his penis as he did in The Exception. There's also basically a cameo appearance of Marlo Thomas who plays Vivian, a supposed love interest of President Ronald Reagan, also portrayed by Showalter.

Christopher Meloni returns as Gene, the veteran who talks to a can of vegetables. He's always hilarious, but in the prequel series he got a pretty epic fight scene opposite Jon Hamm. This time, Molly Shannon who plays his love interest, Gail, gets the epic fight.

There is a ridiculous narrative that tries to top the Skylab plot from the film. The show tries to up the ante with a crazy presidential conspiracy that goes off the rails. At least though, the show acknowledges the plot holes. One shouldn't come to this looking for logic. Yet, the actors are affable enough and they buoy us through this show's goofiness and absolute whimsy that makes it fun to watch.