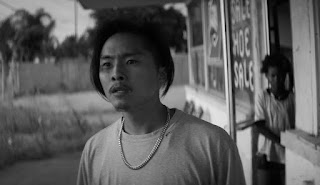 In the opening credits, the word "gook" is defined as an offensive term. Later though, a character is asked what gook means and he says it comes from a Korean word that means "country." Later still, a black character uses the word as a pejorative, almost as negatively as he uses the N-word. Therefore, it's not totally clear if the title of this film is offensive or not. If it is, then that presents a host of issues. If it isn't, the movie itself still states that the word can be perceived as such, so those issues could still be present. There was a movie that came out a decade ago called Towelhead (2008), which faced issues because that word or term is an offensive one or a slur against Muslims, Arabs and Sikhs. Those issues are namely marketing and advertising. If it's in fact a racial epithet, how is it to be sold? It could conceivably be tantamount to titling a film "Nigger," and then having to make commercials to air in prime-time where that word is flashed or just having that word put on the marquee in major movie theaters.

What this movie has that something like Towelhead didn't is a writer-director-star who is that minority whom the epithet targets. Gook is an epithet, allegedly, toward Koreans. Well, the writer-director-star here is himself Korean-American, so whatever backlash might ensue can be assuaged by that fact. However, that's not going to be apparent to any Asian person who walks up to the movie theater and sees that word flashing on a billboard. Again, how should a black person feel if they walked up to a movie theater and saw the N-word flashing?

Legally, the writer-director-star doesn't have to worry. This year, the U.S. Supreme Court decided in Matal v. Tam, a court case involving an Asian-American musician named Simon Tam that the Lanham Act, which tries to bar offensive names from being patented is unconstitutional. Therefore, potentially, offensive names, such as Tam's group, The Slants, the football team, Washington Redskins, or the rap group NWA can't be sued for their names. This movie's title can simply be seen as a provocative title that may have been misappropriated and turned into an epithet, but if one watches this movie, one can tell there is no ill intent to disparage Asian-Americans. In fact, it's one of a few films to feature more than one Asian-American in a lead role, and portraying those Asians as more than just one note or a stereotype. That alone should override whatever negativity its title might engender.

The aforementioned, writer-director-star is Justin Chon and he definitely makes a topical and relevant film here, setting his story on April 29, 1992, the day of the infamous Los Angeles riots, which came in the wake of the Rodney King beating, one in a long line of examples of police brutality along racial lines. This year marks the 25th anniversary of those riots, an anniversary that comes in the wake of the controversial Black Lives Matter movement, an organization that specifically targets police brutality but has also spotlighted race relations in this country.

One cannot draw straight lines from Chon's film to Black Lives Matter, as he specifically never involves the police in any part or in any scene of this movie, even when it makes sense for characters to call the police. No, this movie examines race relations away from those murky waters and not along the typical battle lines. There was and perhaps still to this day is tension between the African-American community and the Asian-American community. That tension was certainly underscored during the riots when Asian-owned and specifically Korean-owned businesses were damaged.

Despite the fact that Chon has made this movie in black-and-white, in terms of whose side the audience should favor, the movie isn't so black-and-white. Despite Chon being the writer-director-star, he doesn't make himself out to be the hero or the Koreans as the heroes we should champion or the victims we should lament. He helps us to understand both sides. His only stumble is that he possibly allows the performances to go too far and be like blunt instruments at times.

Chon plays Eli, a young Korean man who inherited his late father's shoe store in an area of Los Angeles, known as Paramount, just south east of South Central Los Angeles, the site of the riots. The shoe store hasn't been doing well and it's in danger of closing because Eli can't make the rent payments. On this day, he stages a special sale of these highly valuable shoes, hoping that will earn him enough money to keep the store. 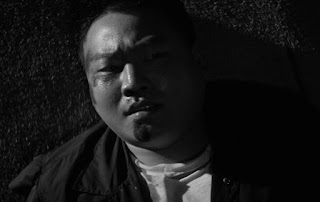 David So plays Daniel, the brother to Eli who works at the shoe store, though he'd rather be a R&B singer. He's trying to save up money to record a demo. So far, he only has enough to record at a makeshift studio in or near South Central for a black guy who may or may not have proper sound proofing. Daniel would also rather hit on girls than help with the shoe store.

This is where Eli and Daniel bump heads. Eli is desperate to hold onto the store, whereas Daniel isn't. In one scene, Eli unleashes a lot of anger onto Daniel for not being as gung-ho about saving the store. It's not the only time we'll see Eli unleash anger. The problem is Chon lingers on a wide shot of himself acting out this anger that goes on for a bit too long, which is perhaps the point but it feels too drawn out. The real power was not seeing Eli's anger but in seeing Daniel's reaction.

Yet, it does set-up a later scene where Eli's anger is unleashed on Mr. Kim, played by Sang Chon, the real-life uncle of the director. Mr. Kim is the owner of a liquor store across the street from Eli's shoe store. That scene also felt drawn out and uncomfortably too long, but it was effective in where that character needed to go in order to realize the tensions in the community. Essentially, Eli yells furiously at Mr. Kim for pulling a gun on a little black girl whom has become Eli's surrogate sister.

Simone Baker plays Kamilla, the little black girl in question who is the surrogate sister of Eli. She annoyingly insists on working at Eli's store. Why she and Eli are so close is unclear until the very end when it's revealed that their bond isn't despite the racial tension. It's actually because of the racial tension. Kamilla is smart and tough. She likes to sing and dance and was a great find for this film. 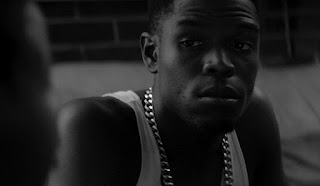 Curtiss Cook, Jr. plays Keith, the older brother to Kamilla. He's taking care of Kamilla and his other sister Regina after the tragic passing of their mother on whom Keith strangely blames the Koreans. Keith is also the source of a lot of anger, which he also unleashes. A crucial scene in the living room of his house has him unleash a sea of fury and pain on Kamilla. That scene displays what I feel is so far one of the best performances from an actor all year and the best performance from Cook that I've ever seen, and I thought he was superb in the film Naz & Maalik (2016).

However, Chon should have reigned him in during a later scene at a hospital. Cook goes a little overboard. It might be understandable, but, instead of being loud and fevered at the end, the better choice might have been to be silent or at least more calm, as in the case of Spike Lee's Do the Right Thing (1989) of which this movie certainly echoes.

Not Rated but contains language and violence.
Running Time: 1 hr. and 34 mins. 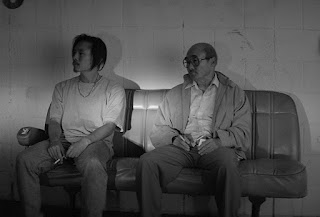 Available on December 5th on VOD.