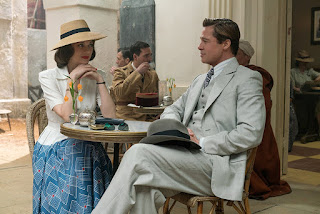 Nominated for Best Achievement in Costume Design at the 89th Academy Awards, it lost to Fantastic Beasts and Where to Find Them, the Harry Potter spin-off set in 1920's New York City. Colleen Atwood, however, had already been nominated 11 times prior and she won three times prior. Joanna Johnston, the costumer here, had only been nominated once before, and that was for Lincoln (2012). Yet, she has had an incredible career working with the likes of Steven Spielberg on Indiana Jones and the Last Crusade (1989) and Saving Private Ryan (1998). Johnston would have been my choice in this category. Here, she works again with long-time collaborator, the Oscar-winning Robert Zemeckis (Forrest Gump and Back to the Future), but this time, they're doing a World War II, spy thriller.

Brad Pitt stars as Max Vatan, a Canadian air force pilot who is recruited to assassinate a German ambassador and Nazi who is going to be in Morocco, and specifically the city of Casablanca. To get him close enough to the ambassador, he's partnered with a French resistance fighter who has infiltrated German society in Casablanca and who gets them invited to a German celebration where the ambassador will be.

Marion Cotillard (Inception and La Vie En Rose) co-stars as Marianne Beauséjour, the aforementioned, French resistance fighter. She poses as Max's wife, but she's already been living there for some time, so when Max arrives, she has to train him on what the cover story is and how to behave, as well as what to say to earn the trust of the Germans. 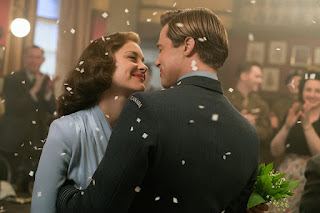 Due to the initial setting and how later the French anthem "La Marseillaise" is integral here, it's likely Zemeckis had the Oscar-winning film Casablanca (1942) on his brain and as an inspiration. This film even takes place in the same year as that Humphrey Bogart and Ingrid Bergman classic. The narrative and tone are quite different, but an overall, similar feeling is ever present.

However, when Marianne starts training Max on how he should behave, his Parisian accent, as well as the way and where he should move, I was reminded of a much more recent film. A brief chunk, early in this movie, echoes German filmmaker Christian Petzold's Phoenix (2015). That film takes place in the immediate aftermath of World War II and involves a man and a woman who aren't spies but who are trying to put on a deception, but it's the man training the woman how to speak, dress and walk in order to fool others. There's also a double layer of one person trying to secretly determine if the other has betrayed them. Both movies are ultimately about the love and especially trust between a married couple.

The best expression of that and possibly the most thrilling is Alfred Hitchcock's Suspicion (1941). In terms of spy thriller and romances, nothing probably tops Hitchcock's Notorious (1946). Yet, Suspicion is the film that came to mind as I was watching this with Pitt in the Joan Fontaine role. Pitt's character of Max is told after he falls in love, marries and has a baby with Marianne that Marianne is actually a German spy. Max doesn't want to believe it but he worries that it might be true.

If Zemeckis wanted to push it more into the action realm, this film could have became a lighter, 1940's version of Mr. & Mrs. Smith (2005), which was another Brad Pitt, spy movie where his character is put at odds with his spouse. No, instead, Zemeckis wanted it to be more of a psychological terror in the vein of Suspicion. The problem is he can't help but lean on those action realm set pieces. 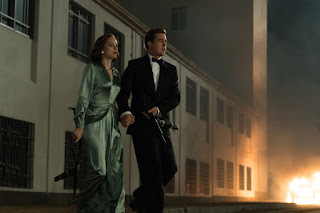 Perhaps, it's just the script by Oscar-nominee Steven Knight (Dirty Pretty Things and Eastern Promises) that can't help but punch up things with the occasional gun-fight or prison escape involving grenade explosions and Max mercilessly killing Nazis, almost as if he's still in bad-ass mode from Quentin Tarantino's Inglorious Basterds.

The movie wants to be this tête-à-tête where it's just Pitt and Cotillard in a house in London trying to live a happy life with this under-current of doubt and mistrust. Yet, we get too many distractions. The opening scene of Max parachuting into the Moroccan desert, while visually interesting, is just flashy for flashiness' sake and takes away what could have been more time between Pitt and Cotillard. It just felt like Hitchcock was more economical with his time and never indulged as much as Zemeckis does here.

There was also something a little disappointing about the revelation of whether or not Marianne was a spy. Like in Phoenix, this film has the revelation occur at a piano. Petzold doesn't hold the audience's hand through the revelation. He just makes the audience have to think about it. I thought that might be the direction here, but it isn't. The film sets up a test, a phosphate test that Max passes, despite him lying.

The film then sets up a piano test for Marianne, which I thought was going to mirror the phosphate test for Max. If the results of the piano test had mirrored the results of the phosphate test, it would have made things a bit more ambiguous and forced the issue of love and trust to be really examined. Can we ever really know a person, or, can we love them in spite of doubts? But, the movie reveals the truth rather easily and makes things rather black-and-white. It doesn't leave us instead with interesting questions. 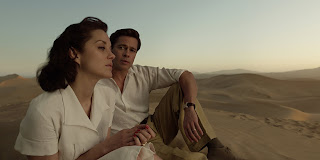 Rated R for violence, some sexuality, nudity, language and drug use.
Running Time: 2 hrs. and 4 mins.