Movie Review - Birth of the Dragon 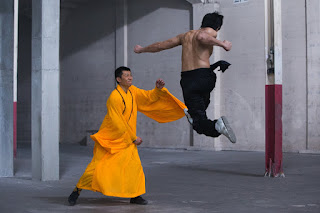 Early in the summer, a film was released about the life of Tupac Shakur, an icon in the entertainment industry who died at a young age. The film was called All Eyez on Me, named after his arguably, greatest work. It featured a dead ringer as the lead but wasn't well-received critically. This one seems to have taken a similar path. However, the problems I had with All Eyez on Me are not present here. This film, directed by George Nolfi who is mostly a Hollywood screenwriter, doesn't fall into the typical traps of a biopic. Arguably, it's not a biopic. It uses real people in a fictionalized scenario or its a fictionalized imagining of a real-life scenario. Some times, those real people are taken far afield like Nikola Tesla in The Prestige (2006). Some times, they're not like Virginia Woolf in The Hours (2002). This film falls somewhere in the middle.

Unlike All Eyez on Me, it doesn't try to be a cradle-to-grave story or encompass so much of someone's life. It focuses on a slice of this person's existence, less than a year. Some people might criticize for not being more encompassing, and I would agree there are some aspects that could have been more deeply explored, but, unlike All Eyez on Me, the dead ringer as the lead isn't just a dead ringer who never acted before. The dead ringer here has acting credits that go back 15 years. He's not a novice and is highly trained. The movie is not as long, so it's able to hone in on its theme and it doesn't hold its subject with such reverence that it can't let him look bad or really be wrong. As such, this film feels way more profound and authentic, no matter how fictionalized.

The real-life story is Bruce Lee. He's Chinese. He was born in San Francisco in 1940. He was raised in Hong Kong until the age of 18. He began teaching martial arts after attending the University of Washington. He married a white woman he met in college and had two children. He moved to California where he continued teaching martial arts where he also began competing in karate championships until a Hollywood producer recruited him to be in movies and TV. He died of an allergic reaction in the summer of 1973 at the age of 32. 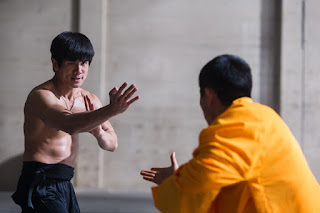 But, in 1964, in Oakland, a city adjacent to San Francisco, in the Chinatown neighborhood, Bruce Lee had a fight with Wong Jack Man, a Shaolin monk and master at Tai Chi. According to Lee, the Chinese community didn't want him teaching white people. He was challenged to the fight as a way to get him to stop his teaching non-Chinese. Wong claimed he requested the fight after Lee bragged in a theater that he could beat anyone in the city, so the cause of the fight is disputed or could be multi-faceted. Regardless, the only known witnesses to the fight were Lee's wife, an associate of Lee and a teacher of Tai Chi. Yet, everyone's accounts are different leading to controversy about what happened or who won the fight. All that's known is Lee changed his ways, his style, his philosophy and training techniques afterward, so this movie attempts to depict why.

Based on the 1980 magazine article by Michael Dorgan, the screenplay was written by Stephen J. Rivele and Christopher Wilkinson. The movie has been criticized for being less about Bruce Lee and more about a white guy who is his student, and being more from the white guy's point of view. That's one reading of the film. Another reading puts this film in the same context as Lee's iconic film Enter the Dragon (1973) of which this movie's title is a riff.

If one watches Enter the Dragon, one knows there's a white guy prominently featured in that film as well. His name is John Saxon. In fact, Saxon is the last face one sees in that film. Arguably, that 1973 movie is told as much through Saxon's character's point-of-view, as Lee's character. Here, Billy Magnussen (Into the Woods and The Big Short) plays Steve McKee, a delivery man for Chinatown restaurants who is also a student at Bruce Lee's school. He falls in love with Xiulan, a girl at one of the restaurants who is under the auspices of a gangster named Auntie Blossom. It's no more pulpy a plot than the one in Enter the Dragon, and I would challenge that Magnussen gets just as much screen time as Saxon. 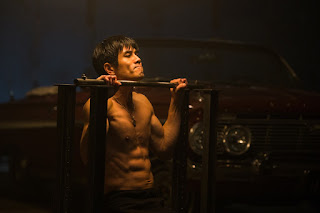 Philip Ng stars as Bruce Lee, a martial artist running his own little school. He occasionally acts or does choreography for the movie business. The movie ignores Lee's wife and kids, but Bruce is aware of the gangsters in the area who are putting pressure on his friends and students like Vinnie, played by Simon Yin. Bruce protects Vinnie when he gets threatened due to gambling debts, which makes him almost a vigilante in the night like Batman. Yet, his personality in the day is less like Bruce Wayne and more like Tony Stark. He's narcissistic, egotistical, prideful and ambitious. Ng embodies that sexy swagger confidently and has a charm to him that rivals the real thing.

Xia Yu co-stars as Wong Jack Man, the Shaolin monk and kung fu master who nearly killed a man in Hong Kong during a match, so he retreats to San Francisco and works as a dishwasher as penance and humility. His reputation precedes him and Steve becomes a student of him. Despite Wong's objections and reluctance to fight again, he's goaded by Bruce and begged by Steve once Xiulan is kidnappd and Auntie Blossom says the fight is the only way to get her back. 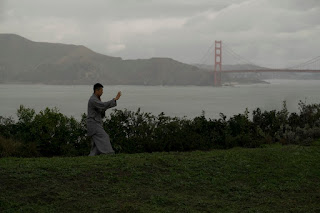 For enthusiasts of martial arts, the whole thing builds to an epic showdown between Bruce and Wong. It's similar to the so-called epic showdown between the titular characters in Batman V Superman: Dawn of Justice (2016). Some might see parallels to the Rocky franchise. A training montage in the middle of the film makes that apparent, but to me it's Batman versus Superman. Arguably, Wong is Superman in this equation, though the build-up, instigation and execution to the fight feels more believable here than in that Zack Snyder mess. It also feels more fun than Snyder's dreariness. The resolution is also a heck of a lot better.

It ends with a really great fight sequence that's probably not as impressive as the final fight sequence in Enter the Dragon. It's certainly not as intense, gritty or bloody as the best martial arts film of this year, Headshot, starring Iko Uwais from The Raid: Redemption, but it does show off the incredible skills of both Philip Ng and Xia Yu. It also brings up an interesting tug-of-war between their characters over how martial arts should be used. In that, the soul of martial arts is the star not Bruce Lee. Lee is just a way in. Some might not be satisfied with that, but I was.