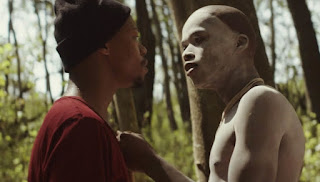 This film premiered at the 2017 Sundance Film Festival where it was nominated for the Grand Jury Prize. It went on to the 67th Berlin International Film Festival where it was nominated for the Teddy Award. It did win Outstanding First Feature at Frameline41 and Outstanding International Narrative at the 35th Outfest Los Angeles. Late August to October 1st is the time countries start submitting to the Oscars for Best Foreign Language Film. Here's hoping this film from South Africa is submitted to the 90th Academy Awards.

Director and co-writer John Trengove was born in Johannesburg in 1978. He attended NYU. He's mainly directed television in South Africa. He's white but his work has mainly been about blacks in that country. Trengove is openly gay and this film is his debut feature, which focuses on a relationship among a group of Xhosa men who are conducting a ritual known as Ulwaluko, a rite of passage or coming-of-age initiation that focuses on a brutal tradition of male circumcision.

Ulwaluko is to the Xhosa men what a bar mitzvah and a brit milah are to Jewish men. The Ulwaluko doesn't have the same religious significance. It's more an overwhelming, cultural tradition, as much ingrained as a bar mitzvah, but it seems to be viewed by most among Xhosa people as being as benign as a bar mitzvah. However, the practice has been criticized for its extreme health dangers, including death, and the stigmatization, as well as ostracism that have occurred as a result. It in many ways is comparable to Female Genital Mutilation, or FGM, which is illegal in many countries.

Much of what is in this film is based on the incredible novel, A Man Who is Not a Man, by Thando Mgqolozana, which tells the powerful story of a survivor of the Ulwaluko, the pain and lifelong shame of it. What Trengove does so brilliantly is couple that pain with the already inherent homophobia to tell a heartbreaking love story between two, beautiful but tragically star-crossed, male lovers and Trengove doesn't shy away from depicting that same-sex love, unlike Moonlight (2016) to which this film was invariably compared. 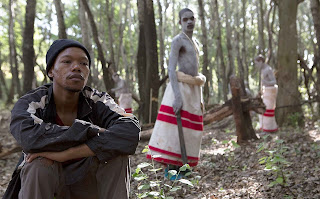 Nakhane Touré stars as Xolani, a forklift operator in a warehouse who seems to live a very lonely life and not a very prosperous one, though every year for many years, he rides on the back of a pickup truck into the mountains. There, he stays in the forest near a waterfall at a camp site where huts have been erected. These huts are for initiates to Ulwaluko. Xolani is acting as caregiver, a somewhat older man who has already gone through the process of Ulwaluko who is now there to shepherd or mentor the initiates through the process. Normally, a caregiver will have more than one initiate, some times a half dozen or so. However, Xolani only has one initiate for the two weeks that the Ulwaluko lasts.

Niza Jay co-stars as Kwanda, the son of Mr. Khwalo, a rich man who lives in Johannesburg. Kwanda is a very privileged boy compared to the other initiates. Kwanda has a bit of a fancy life in the city, whereas the other boys who mostly come from country life don't. For example, Kwanda brings his expensive sneakers and iPhone with him into the hut, even though the boys are stripped bare of all their possessions, including their clothes. The only thing the initiates are allowed is a blanket. Otherwise, they're covered in white powder the whole time, perhaps to symbolize how they were as babies, of pale skin and wrapped in blankets as babies are. Kwanda is bullied for wanting to keep his amenities, but he's already a bit of an outcast for his liberal and progressive views, which question even the validity of this whole thing and certainly challenge the conservative views of mostly everyone involved. He's clearly only there because his father pressured him to be.

Bongile Mantsai also co-stars as Vija, a fellow caregiver and close friend of Xolani. In fact, it's quickly revealed that Vija and Xolani are gay lovers. Unlike Moonlight though, the intimate encounters aren't shy in their depictions. A particular, oral-sex scene done in silhouette is particularly striking. This is probably due to Trengove being gay himself, whereas the director of Moonlight, Barry Jenkins, is straight. This isn't to say straight filmmakers can't or won't depict gay sex. Ang Lee did an amazing job in Brokeback Mountain (2005) for example.

In fact, this movie can be easily compared to the Oscar-winning Brokeback Mountain. That 2005 landmark was about two men who rendezvous at a camp site in the mountains of Wyoming. They do so secretly because society doesn't allow homosexuality. After a breaking point, one of the men who is married is lost to the perils of that society and the other is resigned to a life of solitude and loneliness. That's essentially what happens here to Xolani and Vija. Their mountain is simply in South Africa and not Wyoming, and instead of taking place in the 1960's, the events are happening now, as reportedly homosexuality is still persecuted in Africa. 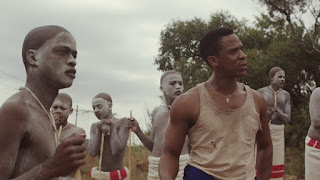 The exception is that for Ennis and Jack, the two men in Brokeback Mountain, the mountain truly was an escape where they could be themselves by themselves. This isn't the case here. Xolani and Vija aren't by themselves and they still have a role to play while on their mountain, a macho and masculine role, so they can never truly be themselves. They still have to straddle a line or sneak around. Things get really complicated when Vija becomes jealous of Kwanda who is somewhat of a rival for Xolani's affections.

Xolani is such an unassuming beauty. He's handsome without even trying. It perhaps helps that Nakhane Touré, the openly gay singer, looks normally like he should be walking the runway as a fashion model. He dresses down here as your average, blue-collar worker, scruffy and possibly scrawny, but one can feel the sexual tension between him and Bongile Mantsai or even Niza Jay, as well as the genuine fear and desperation.

While the comparison to Brokeback Mountain is one I immediately conjured, this movie also reminded me of Netflix's Burning Sands, Gerard McMurray's film about a black, college fraternity. The constant need to prove one's masculinity through the endurance of physical pain, torture or subjugation is similar to the hazing mentality and practices in McMurray's film, as they are in real-life fraternities. It's a type of toxic masculinity that many films recently have touched upon. This one doesn't relate the female experience unlike Brokeback Mountain, but it's still very effective.

Not Rated but contains language and sexuality.
Running Time: 1 hr. and 28 mins.