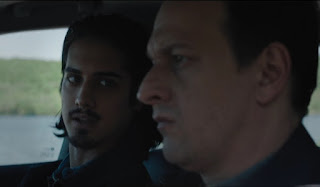 I suppose the movie is about a man whose job is to evaluate if a person is capable of murder but that man is then himself driven to murder. It's based on the novel Border Crossing by Pat Barker, which explores the violent crimes of children. Yet, this film loses sight of that for the sake of pulpy thrills. It wants to be Cape Fear (1962) because that's an easy dynamic that anybody can churn out. Yet, the motives of the antagonist here are a little bit unclear. Ostensibly, it's for a kind of revenge that involves manipulating the protagonist into murder, but the building blocks aren't sufficient to make that manipulation ultimately believable.

Josh Charles (The Good Wife and Sports Night) stars as Tom Seymour, a child psychologist in New London, Connecticut. He's married to an artist named Lauren, played by Julia Stiles. He watches as she goes to New York to pursue her painting career. He also seems to be in fertility treatments with her, but having a baby doesn't appear to be a big priority. Their marriage seems fine otherwise, but when his wife is away, Tom has an affair and it makes no sense, especially since his wife is prettier than the college student with whom he hooks up.

Avan Jogia (I Am Michael) co-stars as Danny Miller, a young man who is college-age but who was recently released from prison. He starts stalking Tom and his wife because Tom testified at the trial and Danny thinks that Tom's testimony helped to convict him 15 years ago.

At first, Danny seems to want to blur the lines between the professional and personal relationship that Tom has with him. Danny focuses on Tom's wife specifically with the implication that he could exact revenge by attacking her or simply seducing her. Yet, that ultimately turns out to be a red herring. Even if it weren't, Jogia is no Robert Mitchum, so he doesn't exactly exude the manly, age-appropriate appeal or even possess the physical stature to really be threatening. 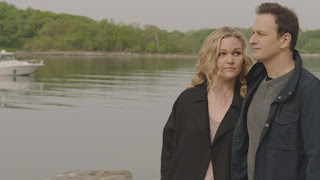 The way things play out, it's almost as if Tom is supposed to discover that Tom's testimony all that time ago was wrong, but that's a red herring. The novel would suggest that maybe Danny's punishment was not what it should have been. It would also suggest that maybe Tom could have turned out like Danny, if not for a twist of fate. The movie has vague hints of that, though none of it is really fleshed out to make any impact.

Josh Charles was in a HBO series called In Treatment about a psychologist in New York. Charles played a patient in that series, whereas here he's the psychologist. Yet, that TV series was so much better written than this B-movie, and for a TV series that was basically two people sitting in a room talking for half-hour, it was way more thrilling than this B-movie.

Not Rated but contains language, sexual situations and some violence
Running Time: 1 hr. and 39 mins.