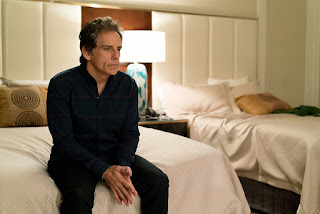 There's no toilet humor here. There's no physical humor like pratfalls or anything juvenile. It's almost one, long monologue, a stream of consciousness where one man reflects on his life. It's a monologue filled with envy and materialism. It plays on the idea of the-grass-is-always-greener-on-the-other-side and the idea of a person never being satisfied. There's also an element of greed, but it's not necessarily about wanting more. It's more about wanting the absolute best, as dictated by having large sums of wealth. It's about defining what success is through money and opulence, and possibly even decadence, and it's about how that's ultimately not good.

Ben Stiller (There's Something About Mary and Meet the Parents) stars as Brad Sloan, the head of a nonprofit that helps other nonprofit organizations find funding. He lives with his wife who is a lawyer and his teenage son in Sacramento, California. His thoughts form the narration for this film, which is constant and throughout. His are an inner monologue and his thoughts do have a theme. He thinks his life is mediocre and despite living very comfortably, he wishes he had more money. The impetus for these thoughts is seeing how more successful his college friends are compared to him. All his college friends, three of them at least, are rich and living in the lap of luxury, and Brad is jealous as he watches from a far on Facebook. 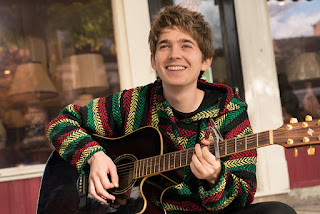 Austin Abrams (The Walking Dead and Paper Towns) co-stars as Troy Sloan, a child prodigy in music. He plays and composes. He's 17 or 18 and is applying to colleges. He's going with his father, Brad, to visit, tour or interview at some universities. He wants to go to Harvard where his favorite professor teaches. He also has Tufts University as a backup school, which is only 10 minutes away, and is the alma mater of his father. Troy is in many ways the average millennial, slightly disaffected, more concerned with his phone and like most teenagers more about trying to stay cool.

The majority of the film is Brad and Troy on this college tour in Boston. They hang out in hotel rooms and on campus for meetings and whatnot. Brad is surprised though when he learns that Troy could get into Harvard but a scheduling snafu puts Troy's chances in jeopardy, so Brad makes it his mission to get his son into Harvard. In order to do that, Brad has to call in favors from his three college friends. This forces Brad to confront his jealousies and insecurities, a lot of it stemming from issues in his past and some regrets. In that way, this film is not unlike Manchester By the Sea.

In fact, this film could be "Manchester By the Sea 2" but less depressing. It's initially so but depressing over trivial matters. A man wants to trade his idealism for flying in private jets and frolicking on a beach with two sexy women. It's a movie where the stakes are Harvard-or-Tufts and coach-versus-business in terms of airplane seats. The stakes are rather insignificant and don't concern the life-and-death issues in Kenneth Lonergan's Oscar-winning film. Stiller probably won't win any awards for his character's anguish and despair, but I was more moved by the relationship between the man and teen here than in Manchester By the Sea. 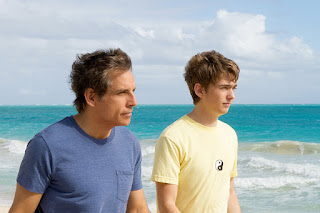 There are a lot of films that are about fathers and sons. Not many of them are chiefly about a teenage male and his father that isn't some crime story, a single father or some dysfunctional dynamic  that's possibly tragic. It feels rare to see a father-son relationship depicted that isn't any of those things and that's basically normal and loving.

Writer-director Mike White warmly and honestly explores that relationship without the usual trappings or dramatics. It's one that is genuine and many, if not every one can relate. White comes up with tensions that arise due to the situation and they're simple and straight-forward, which actually ends up being smart and fresh comedy. Because he's implanted such heart within it all, White is able to end on a beautiful note.