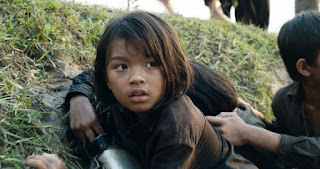 This is the official submission from Cambodia to the 90th Academy Awards for Best Foreign Language Film. Cambodia first submitted a film for the 67th Academy Awards. In 23 years, Cambodia has only submitted five other films. This would be its sixth. Cambodia was nominated once back at the 86th Academy Awards for The Missing Picture, directed by Rithy Panh who is a producer on this film. It will have a lot of competition. There have been a few films that have gotten a lot of buzz so far this year, especially the award-winners out of the Berlin International Film Festival and the Cannes Film Festival, but given who the director is, her star-power might be enough to get this film on the shortlist for the Oscars.

The film is about tangentially the Khmer Rouge. The Khmer Rouge was the name given to followers of the Communists in Cambodia, or the Communist Party of Kampuchea. The Khmer Rouge came to power after the Vietnam War and reigned over Cambodia from 1975 to 1979. During that time, the Khmer Rouge was basically guilty of genocide. Yes, they killed people by shooting, beating or blowing them up, but mainly people died due to starvation or sickness, because the Khmer Rouge's strict agricultural policy limited food and medicine to the masses. Around two million people perished as a result. 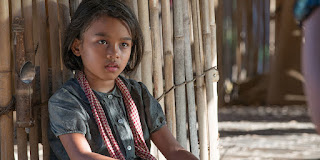 Directed by Angelina Jolie, this film adapts the 2000 memoir of Loung Ung who is a survivor of the Khmer Rouge. She was a little girl at the time and this movie recounts her experiences, as her family was pulled apart and she bore witness to a lot of death. This is the fourth, narrative feature directed by Jolie and it probably bears the most resemblance to her first feature, In the Land of Blood and Honey, which was about a young woman's experience during the Bosnian War, a conflict that also had genocidal activity, what was called then ethnic cleansing.

Jolie seems to be drawn to stories about girls or women suffering or surviving these near-genocides. This film as well as her first are supremely effective. I'm not sure if it was the circumstances or the filmmaking or both, but I could not stop crying throughout this story. It is highly emotional and empathetic to the max. One might argue that it's manipulative, as the harrowing events occur to children. In fact, we see children crying at the horror they face. One would have to be made of stone not to be moved by children crying, dying and put in severe danger with no hope of escape.

However, I was not crying from beginning to end at Beasts of No Nation, which is another close comparison here. Jolie's film is essentially in the same exact genre, if one could call it that, or a parallel remake. The only differences are the child in question is a 7-year-old girl not a boy and the setting is southeast Asia not Africa. Yet, for some reason, I wasn't constantly wiping my eyes during Beasts of No Nation. That film had a distance and detachment that doesn't exist here.

Jolie tells this story from the point-of-view of the little girl, Loung, played by Sreymoch Sareum. We stay with her so much that we become her. We see everything through her eyes. Beasts of No Nation leaned on the performance of Idris Elba, which wasn't a bad thing, but it lessened the impact of things. Loung's father is played by Kompheak Phoeung, but he's not the overwhelming presence that Elba is. That film also pulled punches, and it's not simply about showing us violence, which Beasts of No Nation certainly did. 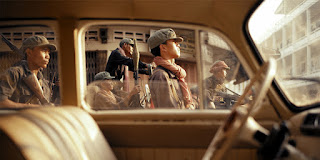 It holds back in a sense, so when the violence does break out, it is more impactful. Jolie stages an incredible action sequence, a war battle with children in the center of it. It's harrowing and was scarier a situation for a group of children than anything in It (2017), or Stranger Things.