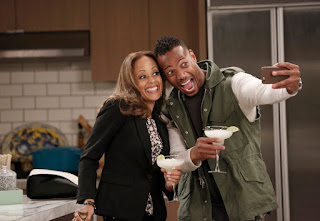 It can't be overlooked that this sitcom is on NBC and it's a show with an African-American comedian and an all-black cast. It comes in the wake of The Carmichael Show, another sitcom on NBC with an African-American comedian and an all-black cast. Yet, The Carmichael Show was cancelled prior to this show airing. It's a shame because there are a lot of aesthetic similarities, but there's also a lot of differences that would make the two shows good complements to each other. Jerrod Carmichael wanted his show to be topical and direct commentary on issues of the day. Marlon Wayans wants this show to be a rather typical, family comedy, more based on character relationships.

One of those relationships would be Wayans' character, Marlon Wayne's relationship with himself. Yes, there is an air of egotism wafting through this show. This is to be expected with any TV program named after its star, which are many sitcoms. However, the outright egotism can't be denied here when the opening theme is simply Wayans saying his own name over-and-over. It can't be denied when each episode starts with selfies and a vlog of Wayans talking directly to camera. Wayans might argue that it's a spoof of the generation that's all about social media and the inherent narcissism where each person with an iPhone insists their lives, no matter how mundane, deserves to be shared, appreciated and liked by the world through either YouTube or Facebook.

It makes sense when Diallo Riddle (Silicon Valley and Late Night with Jimmy Fallon) who plays Stevie, the guy who does the tech stuff for Marlon's social media videos, is depicted as a free-loader or lazy. Stevie is the stand-in for Generation Y, despite possibly being in the same age-range as Marlon but somewhat younger. Stevie is constantly ridiculed for his lack of work ethic and dependence on others. It's a cliché about the Internet age and so-called millennials. 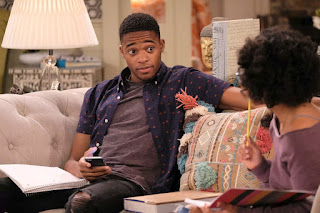 Wayans wants to acknowledge millennials and social media, slightly embracing it, but his real feelings about it spill in the first, two episodes. The second episode in fact reveals Marlon to be a hoarder, a guy who hangs on to memorabilia of the 1990's, before the advent of the Internet and its ubiquity in our lives. It's not just physical objects though. Marlon, as the show, hangs onto some rather stereotypical ideas from the 90's as well.

Even in the first episode, the idea is established that Marlon's ex-wife Ashley, played by Essence Atkins (Half & Half and The Smart Guy), will never be allowed to move on to another guy. Boris Kodjoe (Soul Food and The Last Man on Earth) guest stars as Devon, a potential love interest for Ashley who quickly disappears. In the fourth episode, Ashley's sexual adventure ends up being with Marlon, almost, but the reason given is rather lame. In reality, it was done either to conserve money by not paying Kodjoe to return or it feeds into this idea that Ashley as a character is never truly allowed to be independent of the male protagonist. Her character is only in service his. 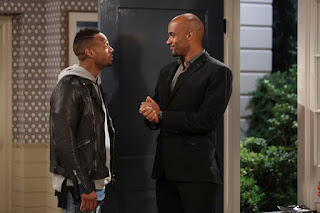 Regardless, Wayans is very funny. In fact, he's at times reminiscent of Robin Williams in his prime. I'm not sure of what is scripted and what's not, but there are moments when Wayans goes rogue. In those moments, Wayans' breathless ad-libs and non-stop improvisation or what feels like ad-libs and improv are insane, unrestrained and show a freedom that most comedic actors lack. These moments, which I'll call Marlonisms, are the most memorable and typically become the centerpieces of each episode.

In the first episode, the first Marlonism is what he labels as "go ghetto." The third episode has the Marlonism where he reads Meyer's character for filth, and in the seventh episode, the Marlonism involves what he describes as the Viola Davis, snot nose cry, as well as a crazy breakdown on a hospital gurney. Each of these Marlonisms had me cracking up and made this, at times, regressive sitcom enjoyable to watch. 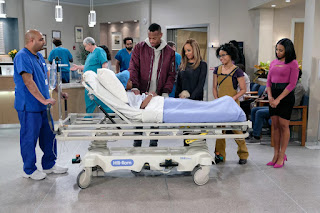