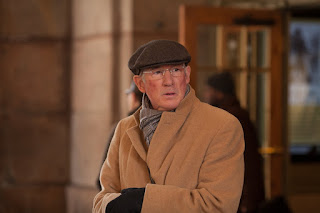 I'd like to think myself smart and I want to believe that most movies are easy to understand, but I had trouble with this one. On an emotional level, the movie isn't difficult to understand and that level is successful thanks in large part to the incredible performance by the tremendous cast, led by Richard Gere, and at the end of the year, if Gere is recognized at any awards show, it would be absolutely deserved. Unfortunately, the intricacies and nuances in which the characters are involved was a little confusing to me and I didn't fully grasp what the big deal was.

This movie mainly has to do with politics and the upper echelon of New York society. It centers around Norman Oppenheimer, played by Gere, and a web of corruption he builds. However, the movie walks this fine line that makes Norman seem like he's very smart and also very idiotic. He also comes across as very desperate and despite having numerous connections he also seems very lonely. His actions then spring from that desperation and loneliness.

Writer-director Joseph Ceder (Footnote and Beaufort) constantly frames Norman by himself and on the phone. Often, the other person will be shown but in a split-screen, which often further isolates Norman and shows how lonely he is. The problem is Ceder only shows Norman when he's in work-mode. He claims to have family and friends, but Ceder never depicts that family or those friends.

This is perhaps purposeful to indicate how Norman's obsession with his so-called work has caused most, if not all of his isolation and loneliness. If so, that's fine, but it does distance us from the character a bit. From what I gather, the issue is quid-pro-quo and Norman trying to get an Israeli politician to do favors for him in turn to get favors, or maybe not? Aside from a pair of shoes and a listening ear, I'm not sure what the politician gets in return for his relationship with Norman.

Lior Ashkenazi (Footnote and Late Marriage) co-stars as Micha Eshel, the Prime Minister of Israel. He befriends Norman prior to his election after Norman buys him a pair of shoes and tries to get him to attend the party of a very wealthy and very influential man in New York. Micha's embrace of Norman after the election encourages Norman to call over and over asking for favors.

The film shows us a montage of Norman repeatedly calling but never getting Micha on the phone. Micha's assistant keeps blocking, so it seems as if the relationship that Norman thinks he has is all in his head. It could be all a delusion.

Charlotte Gainsbourg (Melancholia and 21 Grams) also co-stars as Alex Green, a lawyer who is investigating corruption. A chance encounter with Norman who can't help but inform on himself opens Alex's suspicions. What she discovers suggests that Norman isn't delusional, but I feel like the film never really shows what specifically the quid-pro-quo is. Gainsbourg, like the other actors, is fantastic in the cold and clinical fashion that Alex operates. 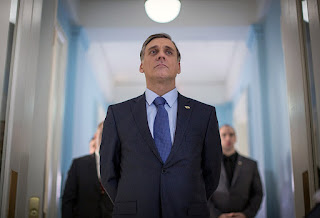 I can piece together that the charge is bribery. This is because in the movie, a news report cites bribery as the charge. The specifics of that bribery are never detailed. Micha was apparently given money but it's never said how much money or when. There is a side-plot about Norman trying to raise money for a synagogue in danger of closing. What I couldn't figure is if this synagogue situation was known to Micha or not, or if something else was at the heart of the bribery.

Because of the great performances, it almost doesn't matter. Even minor performances from actors like Josh Charles (The Good Wife and Sports Night) are pretty impactful. Ceder crafts a very interesting and often compelling, acting vehicle. I just can't tell if the whole thing was handled smartly or handled too vaguely.