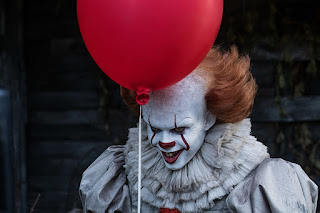 This film could have also been titled Stranger Things the Movie. Yes, it's an adaptation of the 1986 novel by Stephen King, but it shares an actor with the Emmy-nominated Stranger Things and similarly traffics in the same wave of 80's nostalgia. Stranger Things took its influences not only from Stephen King but also from Stephen Spielberg. Yet, the Stephen King influences were more strongly felt because of the emphasis on the horror aspects, but who knows? When King wrote the book, he could have pulled from popular Spielberg properties like Poltergeist (1982), in which a demonic force targets children and at one point uses a clown as a source of terror, or The Goonies (1985), in which a group of kids go on an adventure that take them under a wishing well. With this film, one is almost watching the hybridization of these two ideas.

Unlike Stranger Things though, this movie, written by Chase Palmer, Cary Fukunaga and Gary Dauberman, renders the adults and authority figures as either useless or themselves just as monstrous as the titular demon. There are seven children in this story and the parent, usually the singular parent, of almost all of them is cold or outright abusive. It would be fine, if a few were like that, but, for all of the parents to be that way defies credulity. Obviously, the point is to reinforce how the children must rely on themselves and find their own inner strength and courage, but, after a while, it becomes comical how much the adults are like cartoon antagonists, as opposed to the over-the-top cartoon antagonist who gets a lot of focus here.

Bill Skarsgård (Hemlock Grove) stars as Pennywise, a creepy clown that loves red balloons and dancing. Pennywise is the preferred form of a demon of unknown origin that can shape-shift into anything that scares the children it targets. Pennywise specifically targets the children and usually can only be seen by those children. It travels in the sewers of Derry, Maine. It lives in an abandoned house, built on top of a wishing well through which it has access to those sewers.

However, throughout the movie, we see that Pennywise can teleport or project itself to any place in town it wants, even to places that aren't connected to the sewers. It attacks one boy in a library and it attacks all seven children in a garage. The movie establishes that Pennywise feeds off the fear of children, which is why it likes to toy with them and scare them before killing them. It's unclear if Pennywise eats them for sustenance or not. He too collects them like a squirrel saving nuts but it's not explained why, although he is compared to cicadas in how he hibernates for some time. 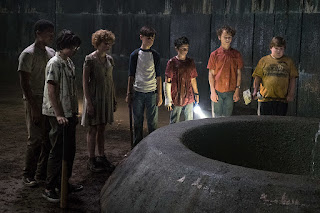 The problem is that with the exception of the first kill, Pennywise has no bite. The seven children whom we meet all survive pretty much unscathed. Even in moments when Pennywise has them trapped, he doesn't do anything. There is a reference to A Nightmare on Elm Street in this film whose villain was Freddy Krueger who similarly targeted children and teenagers. Except, in those Freddy Krueger films, typically half the cast would be slaughtered by the end. That isn't the case here.

The opening scene sets the table. Pennywise kills a 7-year-old boy named Georgie in that opening scene in a brutal and bloody fashion, as well as rather quickly. No other attack is like that and as a result, there are no further kills of the seven protagonists, even when Pennywise has them trapped in which they can't escape. After it kept happening where Pennywise kept letting them escape, it took the tension and scariness away from this film.

Jaeden Lieberher (St. Vincent and Midnight Special) co-stars as Bill, the 13-year-old brother to the boy killed by Pennywise in that aforementioned opening. Bill has a stutter and since his brother's body was never found, he's obsessed with searching the sewers because the last place anyone saw Georgie was near a storm drain.

Sophia Lillis also co-stars as Beverly, the only girl in the group and a Molly Ringwald clone. She has a reputation of being a slut, despite only being 13 too. She lives with her single father and has to deal with her first menstruation by herself. In a riff on Carrie (1976), Pennywise attacks her with a bombardment of blood till she's totally covered. The question is why doesn't Pennywise kill her then? She's trapped in the bathroom. He only showers her in blood and then leaves. Later, he attacks the kids in a garage using a slide projector. Beverly cowers in a corner trapped. Yet, Pennywise doesn't kill her.

Jack Dylan Grazer plays Eddie, a kid constantly taking pills to some unknown illness. He along with some of the others gets trapped in Pennywise's house. He falls and is injured. Pennywise has him cornered but doesn't kill him.

Finn Wolfhard (Stranger Things) plays Richie, the foulmouth friend. He gets trapped upstairs in Pennywise's house. He's locked in a room filled with toy clowns. Again, Pennywise has him cornered but doesn't kill him. He basically lets Richie go. 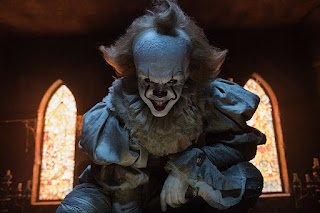 After this kept happening, it became clear that Pennywise had no real teeth despite the hundreds in his mouth that he can monstrously open. If there's no real threat of death, then the movie really isn't scary. You're basically watching kids overcome bullies. In fact, the only true harrowing parts are when the kids are dealing with human adversaries. The bullies got to be comical and over-the-top, but when Beverly is attacked by her father who possibly wants to rape her, that's scarier than any confrontation with Pennywise.

Speaking of Beverly, it's odd that the group of kids couldn't have included more girls. The diversity in this film is lacking. There is a scene that mimics Stand By Me (1986) where the boys are in nothing but their underwear, their tighty-whities and it was in that scene that I thought these are the whitest kids ever. The movie later adds a token black kid named Mike, played by Chosen Jacobs, but it's a shame that director Andy Muschietti couldn't have made one of the kids Asian or Hispanic or both to have had some more diversity.

Also on the issue of diversity, the same scene where the kids are in their underwear also points out something. All the boys stare at Beverly in her bikini, and it was in that scene that I realized this movie is very, if not overly heterosexual. It's a shame that Muschietti couldn't have made one of the kids gay as well.

I almost thought Wolfhard's character of Richie was going to be revealed to be gay. Richie makes so many sex jokes, particularly dick jokes, that it's almost like he's overcompensating for something. Such wasn't the case, and again it's a shame. The movie references the HIV/AIDS crisis of the time. It was a crisis that mainly affected gay men, so clearly the filmmakers were aware of gay men, but they couldn't see fit to personalize that awareness.