Movie Review - Before I Fall 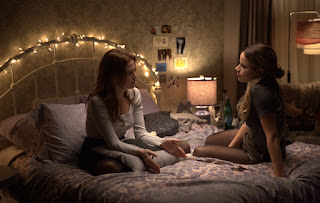 Director Ry Russo-Young makes her movie look like Twilight, probably not intentionally but the obvious comparison is there, given this film is based on a young adult novel focusing on a teenage girl dealing with a supernatural scenario. Instead of vampires, the teen girl is up against the time-loop popularized in the hit comedy Groundhog Day (1993).

Zoey Deutch (Why Him? and Everybody Wants Some!!) stars as Sam Kingston, a girl in high school, possibly a junior or senior, who is still a virgin. Sex though isn't on the top of her mind. She's more into hanging out with her three best friends. Love is in the air though because it's Valentine's Day weekend within the movie. Every thing in fact climaxes at a Cupid party and lives change forever. Yet, at 12:39 AM that night, the day rewinds, Sam wakes up and she's forced to relive the whole thing all over again.

The arc and trajectory of the character is predictable. Sam isn't as horrible as the protagonist in Groundhog Day, but it's obvious here Sam needs to change as a result of things she does the first time she experiences this day. However, as the movie goes along, something else starts to emerge. It's not just that Sam in general has to be a better person or be more appreciative of her privileged life.

No, a specific mission starts to develop and become clear. When that mission reveals itself, I was somewhat surprised, and when Sam's purpose becomes clear, the movie was made infinitely greater than Twilight or a lot of the YA adaptations that have come out in the past decade or so.